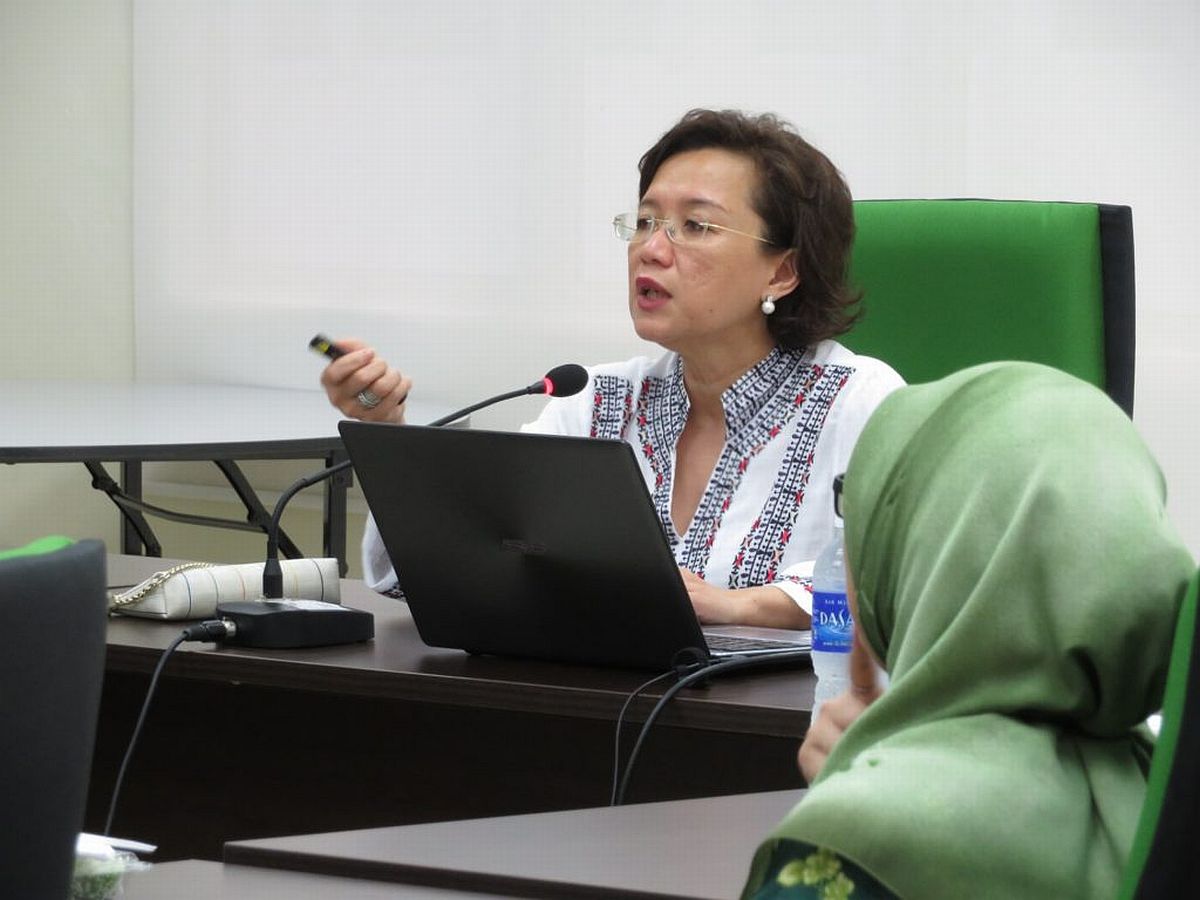 KUALA LUMPUR, July 14 – The goal of ending the global AIDS epidemic by 2030 is achievable by embracing not just evidence-informed response when it comes to strategies and policies, but also a rights-based approach, said Malaysian AIDS Foundation chairwoman Dr Adeeba Kamarulzaman.

“That has really been part and parcel of how we hope that national strategies, national policies are written or implemented when it comes to HIV prevention and treatment programmes,” the infectious disease expert told the Women in Global Health webinar series, organised by Universiti Malaya last month on “HIV/AIDS: Advancing the Rights of the Marginalised”.

Dr Adeeba said the HIV movement has been responsible for making health professionals realise that the non-medical elements, or social determinants of health, are also crucial to ensuring the best health services and outcomes.

“So when we talk about rights, I guess there are many, but the one that concerns us most obviously is the right to health,” said the International AIDS Society president.

Noting that the right to health and human dignity is enshrined in the United Nations’ Convention and Declaration of Rights, Dr Adeeba pointed out that rights and the major issue of inequalities and inequities, which gained global attention during the Covid-19 pandemic, have a huge impact on health outcomes.

In recognition of this, UNAIDS (the United Nations programme on HIV/AIDS) developed a global AIDS strategy for 2021-2026 to include all the important elements of the social determinants of health, including rights and equality, to achieve the goal of ending AIDS as a public health threat by 2030.

Three strategic priorities have been outlined under this framework which are: maximise equitable and equal access to HIV services and solution; break down barriers in achieving HIV outcomes; fully fund and sustain efficient HIV responses and integrate into systems for health, social protection, humanitarian settings, and pandemic responses.

“In terms of breaking down barriers, what we need to do in order to achieve ending AIDS would be paying attention to human rights, ” said Dr Adeeba.

“And really spending on community led responses that the HIV movement have been known for even from the beginning, that we must address inequality and we must bring in young people as part of the solution.”

While great strides in the treatment and prevention of HIV/AIDS have been made in the last two decades and a half, Dr Adeeba said in Asia and the Pacific region, progress in terms of reduction in new HIV cases and mortality has come to a standstill.

“We’ve seen remarkable achievements in high income countries and even in Sub Saharan Africa, with a lot of effort and funding from international bodies, but here in Asia Pacific, in the last decade, the decline in new HIV infections has stalled. There has only been about a 20 per cent decline compared to the global average of 31 per cent decline (in new HIV infections).”

Malaysia, in particular, is not doing well in curbing the rise of new HIV infections, Dr Adeeba said, and now finds itself in the same category as countries with poor health systems or unstable economies such Papua New Guinea, Timor-Leste, the Philippines, and Afghanistan.

“We’re unfortunately locked in with those countries for the reason that we are seeing new HIV cases,” she said “And we haven’t been able to address a reduction in AIDS mortality, like many other countries have in the region.

“Perhaps the deaths, we were not doing too badly. But in terms of new infections, we’re seeing far too many new infections per year. More than we should.”

Ninety-four per cent of new infections occur among what is termed as key populations in the HIV movement. These include people who are at high risk of infection who are traditionally marginalised and criminalised.

People from the key populations have greater vulnerability and are at heightened risk of HIV infection. Female sex workers and PWID have the highest risk of acquiring HIV compared to the general population at 30 times and 29 times more respectively.

MSM are 26 times more at higher risk than the general population of acquiring HIV, while transgender individuals are 13 times more, and people in prison and other closed settings are six times more.

Unfortunately, these high-risk populations are not accessing or have incomplete access to prevention tools and treatment, Dr Adeeba said.

“So now still after more than 10 years of knowing that PrEP works, the scale up of this highly effective prevention tool is still very, very slow, particularly to people who need it most.”

PrEP is a medicine for prevention of HIV from sex and injected drug use.

“And for PWID, the availability of syringe services programmes (SSPs) and opioid agonist treatment is also not to scale, not covering as many of the  populations as we should be. So it’s no surprise that we’ve seen many, many new infections in our region.”

SSPs are a public health strategy for PWID. SSPs aim to reduce HIV and other blood-borne infections by promoting the use of new or sterile injection equipment for each injection.

Dr Adeeba said part of the problem is that half of the key population do not know their HIV status. She said late presenters who come with advanced AIDS disease are also very common.

“Our clinics, our wards at PPUM (Universiti Malaya Medical Centre) are still admitting lots of patients who come in with opportunistic infections, often with multiple opportunistic infections, indicating very advanced disease, when really, our goal should be to get as many people tested and know their status before their immune system gets destroyed by HIV, receive treatment so that they don’t ever have a decline in their CD4 count and be susceptible to opportunistic  infections.”

CD4 cells are also known as T cells, a type of white blood cell that fights infection and is essential to strengthening the immune system. A CD4 count measures the number of CD4 cells in the blood and is used to check the health of the immune system of people infected with HIV.

Ideally, people who are infected know that they are living with HIV from an early stage, receive treatment and are not transmitting the virus onto other people, Dr Adeeba said.

“But instead we have people with very advanced disease not knowing their status and potentially transmitting to other people.”

Aside from not being able to ensure adequate coverage of HIV prevention tools, Malaysia is also not achieving the UNAIDS 95-95-95 target, where 95 per cent of people living with HIV are aware of their status, 95 per cent of HIV-positive patients receive treatment, and 95 per cent of those on treatment have undetectable viral levels.

“And the importance of that is those with undetectable viral levels will then not transmit the virus onto their sexual partners, to their newborn babies, etc, which is how we hope to bring about the end of AIDS, as we interrupt the ongoing transmission through treatment,” Dr Adeeba said.

According to the Ministry of Health’s (MOH) Global AIDS Monitoring 2021 progress report by the end of 2020, about 87 per cent of an estimated 92,063 people living with HIV (PLHIV) in Malaysia were aware of their status, 58 per cent of reported PLHIV were receiving antiretroviral therapy, and 85 per cent of those on antiretroviral treatment became virally suppressed, or 87-58-85.

In the Asia Pacific region, 95-95-95 has not been achieved in most countries, with the exception of those who are nearing it including Cambodia, Australia, and Singapore, Dr Adeeba said.

“So there’s a lot of work to be done to both scale up treatment, as well as PrEP and other prevention measures,” said the WHO Science Council member.

“Because we’re behind in our testing and treatments coverage, there are missed opportunities to prevent onward transmission, as people are still having detectable viral levels that are not suppressed.

Addressing the HIV problem from a rights-based approach has proven to be effective as exemplified by the needle exchange programme (also known as SSPs), said Dr Adeeba.

“We’ve proven it here in Malaysia. At the time that the needle exchange programme was being implemented, we were seeing up to 6,000 new cases annually. Since its implementation in 2005, I think the number of new cases reported to the Ministry of Health that’s due to injecting drug use has been reduced to less than 500 annually.

“So there’s been a massive decline among PWID, based on science but also the implementation of the needle exchange programme, which came from the rights-based response.

“In the very early stages of the programme, we had to ensure that people who were participating in the programme, including the outreach workers, were not arrested simply because they used drugs.”

Although PWIDs are still viewed from a criminal justice lens in the country, Dr Adeeba said political leaders are starting to talk about the need to look at the problem of drug and substance use from the public health and social angle.

The Achilles Heel Of HIV response

However, she maintained that stigma is still the “Achilles heel of HIV response” and is a significant barrier to achieving the 95-95-95 target.

“And of course, we know that for someone living with HIV, it’s not just one type of stigma you’ve got, particularly in Malaysia, you’ve got whole different identities and characteristics that are parallel to each other that leads to this stigma intersectionality.

“You could be someone who’s really stigmatised for race, gender. And on top of that substance abuse, and if you’ve been in prison, you’ve got that added classification.”

Dr Adeeba cited a survey that was conducted a few years ago among people in the Asia and Pacific region aged 15 to 49. Among those surveyed, 34.4 per cent said that they would not purchase vegetables from a shopkeeper living with HIV.

“This was from 2014 to 2018 when we already know we’ve got effective treatment and prevention.”

A local survey involving medical and dental students also indicated that there is “fair amount of intention to discriminate”, depending on the key population, she said. Those surveyed appear to harbour very negative feelings in particular towards MSM, even in comparison to people living with HIV themselves.

Research on HIV over the years has shown that stigma and health inequities lead to poor mental and physical health, as well poor health behaviours, Dr Adeeba said. Poor mental health includes exhibiting symptoms of depression and anxiety, and an inability to cope.

“Without a doubt, stigma that arises from marginalisation of key populations, whether they are someone who uses drugs, MSM, sex workers, prisoners, or transgender people is a major barrier to HIV services.”

“Cumulatively this leads to a large number of people not accessing prevention and treatment services when they should and which has been shown in the last decade to be highly effective,” Dr Adeeba said.

“This is why we as health professionals need to, despite whatever our personal beliefs in terms of drug use, gender preferences, sexuality, we need to put all that aside and look at the evidence, look at the science if we’re serious about bringing an end to AIDS. And of course, approach the issues if we can, from a rights-based lens.”