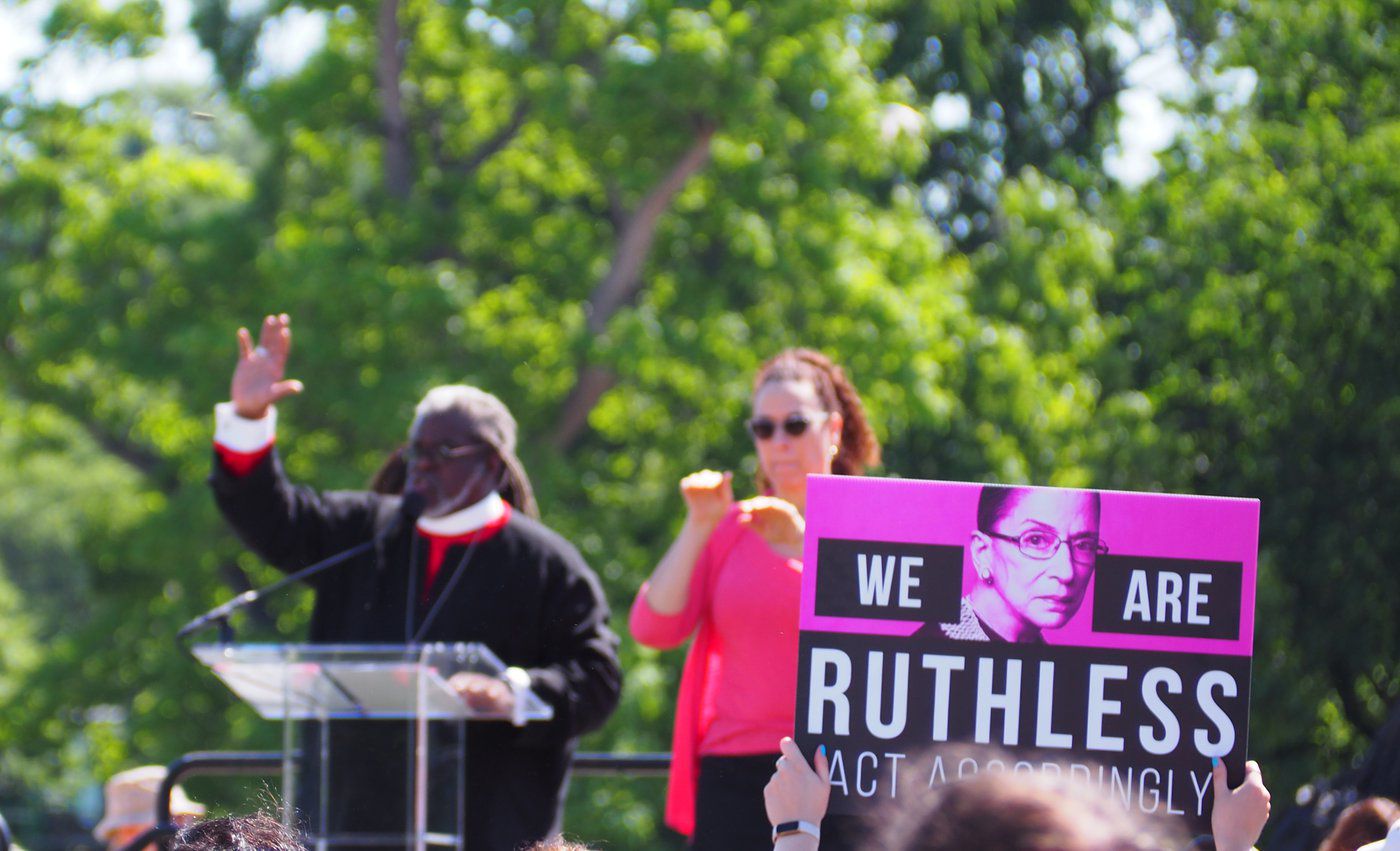 Jewish people rallied against the likely prevention of access to abortion in May 2022. (Frypie)

BOULDER, July 12 – When the United States Supreme Court overturned Roe v. Wade, removing the right for all citizens to an abortion, Twitter exploded.

Among the many declaiming against the decision were numerous tweets from Jewish Americans announcing that, in stripping away the constitutional right to an abortion, the Court also stripped away religious freedom for American Jews.

The statements instead hark back to religious freedom arguments from the twentieth century.

Broadly accessible legal abortion, the argument went, allowed pregnant women to make their own decisions about abortion, in the context of their own religious beliefs (or lack thereof), and potentially in consultation with their clergy.

Pregnancy and abortion rights, then and now, can affect trans men, as well as women. But the conversation at the time was entirely about women.

Ever since the 1973 Roe v. Wade precedent,conservative Christians have used religious freedom to argue that they — as individuals, churches, or the businesses and organisations they operate — must not be required to participate in or pay for any health services that might include abortion.

This stance puts the rights of conservative Christians above the rights and freedoms of anyone whose religious beliefs permit abortion, and whose access might be affected by these refusals.

Republicans, animated by conservative Christian ideas, have already enacted bans on abortion in states like Oklahoma, Texas, and Missouri.

They have made no secret of their desire to push for more such bans, which are pending in many other states.

They will also be proposed at the federal level. These advocates seek to impose a very particular Christian view onto the entire country.

Religious freedom then becomes a valuable tool to reinstate reproductive freedom in states where abortion is outlawed.

Central to the argument is the sheer diversity of religious attitudes to abortion. The stereotype is that religious people are opposed to abortion, but in fact, religious groups and individuals have held — and continue to hold — a wide range of views on the issues involved.

In the US today, opposition to abortion is spearheaded by conservative Christians, especially Catholics and evangelical Protestants.

But this alignment took shape only in the 1980s, and it has never been shared by more liberal Christians or by most other religious traditions active in the US.

For much of US history, abortion was fairly common in the early stages of pregnancy.

A broad cultural consensus held that life began at the “quickening”, when a woman began to feel fetal movement sometime in the fourth month of pregnancy. Newspapers advertised a variety of methods — indirectly and delicately phrased — to prevent or end unwanted pregnancies.

These practices were relatively uncontroversial, not matters of ethical or religious concern. They only came under attack in the late 19th century as medicine became more professionalised.

White male physicians, informed by the scientific racism of the time, warned against abortion as a form of white “race suicide”.

Many states began to pass anti-abortion laws, and many religious leaders began to consider the issue anew.

In the 20th century, American Christians differed widely on the questions involved. Only the Catholic Church advocated consistently for abortion to be outlawed. Protestants were far more divided.

With ‘people of good conscience’ disagreeing on when in a pregnancy human life began, many concluded that the state had no right to make this decision.

The Southern Baptist Convention (SBC), for example, was pro-choice until the early 1980s because of the Baptist commitment to “soul liberty” — that each individual must be free to follow God, and accountable only to God — and the accompanying ideal of church-state separation.

Despite growing anti-abortion sentiment within the denomination, most Baptists viewed laws against abortion as a violation of these theological principles. Some Baptists today, especially outside of the SBC, continue to hold these views.

Many liberal Protestant denominations now are actively and conscientiously pro-choice.

They note that the Bible does not directly mention abortion. One of the few biblical texts that mentions miscarriage, Exodus 21: 22-23, very clearly assigns a lower value to the fetus than to the life of a woman.

This passage, among others, leads some Christians to conclude that abortion is permissible, at least in some circumstances. Pro-choice Christians further ground their support for abortion rights in core theological principles.

They hold that all people are equally beloved by God and so must enjoy the same rights to bodily autonomy and the freedom of conscience.

And despite the formal position of the Catholic Church, many Catholics too support abortion rights, sometimes for reasons that they connect to their Catholic faith — specifically, their Catholic commitments to social justice and the right of conscience. Christian traditions, then, do not speak with one voice on the subject of abortion.

The US, of course, is not a Christian nation, but a religiously pluralistic one. And non-Christian traditions have even more diverse responses to abortion.

Broadly speaking, Islam permits abortion until about 120 days, and to save the mother’s life it is permitted always.

Judaism goes so far as to mandate abortion to save a mother’s life. Liberal forms of Judaism support abortion rights as a feminist issue.

Buddhism has a similarly broad range of responses to abortion, and since the Supreme Court decision, Buddhist leaders have publicly declared their support for abortion rights, with comments like this one, from Shin Buddhist minister Blayne Higa, who wrote, “I will continue to support the spiritual and bodily autonomy of women and others to make informed decisions about their own reproductive health. I believe complex and difficult decisions should be held with compassion and empathy free from prejudice and interference.”

Hinduism too is internally diverse, even more so than Christianity or Islam, but one study shows that 68 per cent of Americans who identify as Hindus say abortion should be legal in all or most cases.

In India, which is majority Hindu, abortion is legal in most circumstances.

Americans have become accustomed to a conservative Christian monopoly on the language of religious freedom. As a powerful religious minority, it has used this ideal, ironically, to subject the rest of the country to its own religious values.

The conservative Christian claim that life begins at conception is theological, rather than biological. For many other people of faith, access to abortion is itself a religious value. Meanwhile, a growing number of Americans do not identify with any religion at all.

If religious freedom is a fundamental principle of the United States, as conservative Christians claim, it holds opens the door for others to argue that the right must be available to all people, not just to some, and not just to those in power.

It remains to be seen whether the position held by one strand of Christianity — the belief that abortion is murder — will be the final word for all Americans.

Samira K. Mehta is Associate Professor of Women and Gender Studies and Jewish Studies at the University of Colorado Boulder. Tisa Wenger is Professor of American Religious History in the Divinity School at Yale University.