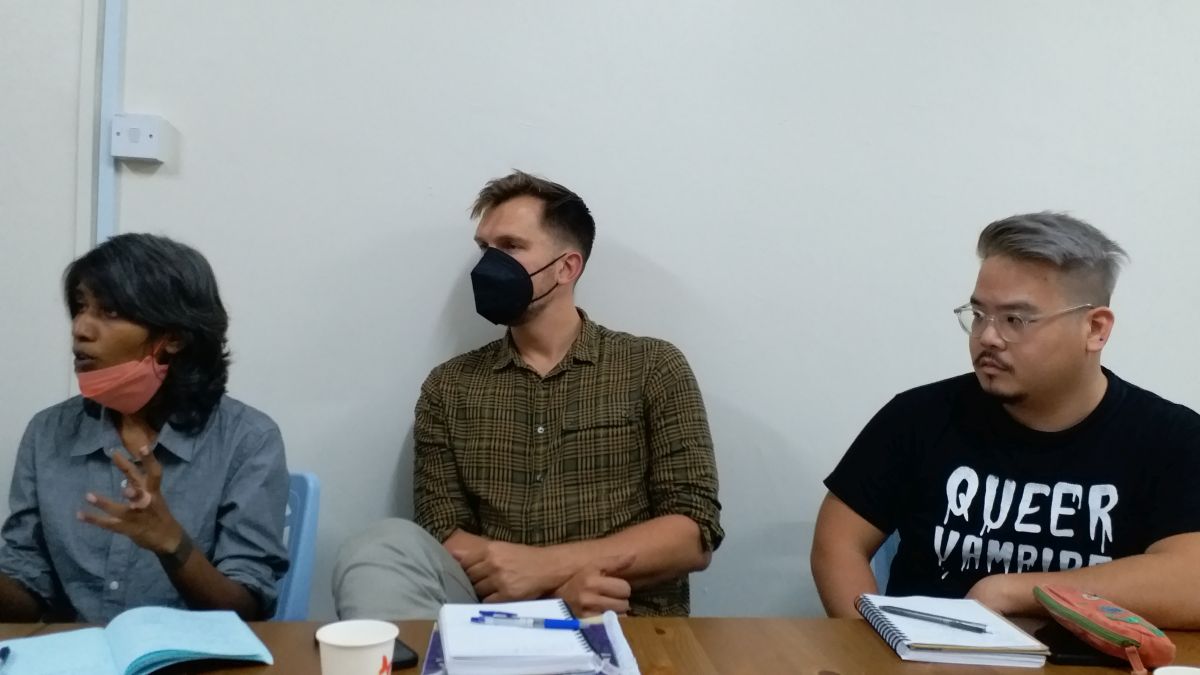 Thilaga Sulathireh from Justice for Sisters, Kyle Knight from Human Rights Watch, and Gavin Chow from People Like Us Hang Out at a media briefing on the report, “I Don’t Want to Change Myself: Anti-LGBT Conversion Practices, Discrimination, and Violence in Malaysia.” Photo by Najua Ismail.

KUALA LUMPUR, Sept 14 –  At least 13 trans people were murdered in Malaysia between 2017 and 2021, according to a report by Justice for Sisters (JFS) and Human Rights Watch (HRW).

While cases of hate crimes and murder against trans people are under-reported and misreported because victims are often misgendered, at least nine murders of trans people were reported in Malaysia between 2017 and 2019. Advocates also documented two murders each in 2020 and 2021.

When sexual orientations and gender identities are viewed as problems, it creates a environment of animosity towards LGBT people. In Malaysia, successive governments have established this tone by casting the LGBT population as deviants who need to be reformed through prevention, rehabilitation and punishment, according to the report, “I Don’t Want to Change Myself: Anti-LGBT Conversion Practices, Discrimination, and Violence in Malaysia.”

“The government is setting the tone for harmful rhetoric,” Amira, a queer woman, said in the report. “When they flag us as a threat, then it trickles down, at the state level and community level.”

Through their remarks, legislation and policies, the Malaysian government have sustained the propagation of anti-LGBT sentiments for over two decades, according to the report.

Over 20 Years Of Anti-LGBT Sentiments

In 1998, during Mahathir Mohamad’s first administration, Umno politicians formed ‘The People’s Voluntary Anti-Homosexual Movement’, or Pasrah, which pledged to “shield” the Malaysian people from the “disgusting practice” of homosexuality.

There was scant attention on LGBT issues during Abdullah Ahmad Badawi’s administration, but when Najib Razak came into power, LGBT people were regularly scapegoated, states the report. In 2012, Najib described LGBTs as a foreign scourge that Malaysians must fight.

Mahathir’s return to premiership in May 2018 brought no significant change to LGBT issues as no measures were taken to address discriminatory laws and policies. Anti-LGBT remarks and incidents also continued to take place.The report noted that in June 2019, Mahathir described LGBT as a Western import that should be rejected.

The religious affairs minister under Muhyiddin Yassin’s government, Zulkifli Mohamad, called for the arrest and “rehabilitation” of transgender people in a July 2020 statement that Malaysian and international human rights groups condemned as “legitimising harassment, discrimination and violence against transgender people,” states the report.

In January 2021, his deputy announced that the government had established an anti-LGBT task force, and that one of its aims was to amend Act 355, or the Syariah Courts (Criminal Jurisdiction) Act 1965 to allow Shariah Courts to impose stronger penalties on Muslim offenders for gender nonconformity.

Google removed a smartphone app in March this year that the Malaysian government had produced in 2016, which the government claimed could help LGBT people “abandon homosexual behaviour” and “return to nature”.

“If the government just stops talking about LGBT people, that would be a huge thing already,” said Amira in the report. “They’re talking to a nation that already has its own phobias. If they would just stop talking about us, it would give us breathing room.”

While the Malaysian government may not be directly responsible for discrimination and violence by the general public towards LGBT persons, their anti-LGBT rhetoric may reinforce a belief among the members of the public that it is acceptable to violently discipline gender nonconforming people, states the report, citing the example of Julia, a trans woman from Alor Setar who said her father beat her to force her to change.

“Between [age] 14 to 16, I experienced a lot of different types of violence from my dad. He took all my clothes and burned them and took all my makeup and threw it away,” she said.

“When I had long hair, he would cut it with bald patches. When I pierced my ears, he took a plier and pulled my ears. My dad would give me [only] rice and water to drink so I would be ‘corrected’.”

Incidents Of Violence And Crime

In February 2017, a group of men stabbed and shot to death Sameera Krishnan, a trans florist in Pahang.

Later the same year in June, five teenagers in Penang beat to death 18-year-old T. Nhaveen, who had been bullied by classmates for being “effeminate”. The assailants reportedly anally raped him with a bottle.

Suki, a trans woman in Seremban, was attacked by eight men in August 2018. She told Human Rights Watch and Justice for Sisters that the assailants surrounded her and beat her with sticks, striking her head, neck, and back. Her ribcage was broken, and doctors had to remove her spleen.

She was assigned an investigating officer who took the case seriously and treated her with respect, but other police officers, Suki said, tried to get her to negotiate a “deal” with her attackers, who offered to pay her in exchange for not filing charges.

In December 2018, attackers pulled two men from a car and beat them for allegedly engaging in same-sex relations, then circulated a video of the assault on social media. Activists filed a police complaint and held a news conference calling for the attackers to face justice.

Officials at Dang Wangi central police station in Kuala Lumpur promised to investigate the December 2018 attack, but the victims did not come forward, and no one was arrested. Despite press attention to the case, no government official publicly condemned the assault.

“At the end of the day, the law alone is not enough. You may charge the attackers, but you need education, and people need to accept. The authorities have not talked about this case or the trans women who were murdered,” said Ace, a lawyer who has represented gay and transgender clients, in the report. He was commenting on the murders of Nhaveen and several trans women murdered in 2018 and 2019.

“I would suspect they do know these are hate crimes, but they refuse to even talk about hate crimes. When you start talking about hate crimes you have to talk about acceptance. The government must really put the foot down and say this has to stop: LGBT people are people. But of course, the question is whether the government is ready and bold enough to stand up for marginalised people.”

Five suspected assailants in Nhaveen’s case have been charged with murder, but media reports failed to mentioned the anti-LGBT animus involved in the case, states the report, which also noted that in most cases justice eludes LGBT victims.

The officially sanctioned discourse on the need to “change” or return to “the right path” also contributes to discrimination, harassment, attack and vigilante violence. The report cites the example of a vigilante group called Squad Bada’r in Sungai Petani, Kedah, which began targeting trans women in March 2018.

Nadia, a trans sex worker, was among those that Squad Bada’r targeted. One of its members solicited her for sexual services, then recorded their conversation and returned to the hotel where she worked in an attempt to “arrest” her. Security guards kept the man out of the hotel.

“They don’t send people they arrest to the religious authorities. They bring them to an area where there are a lot of people, a public place, and would force them to pray,” said Nadia in the report, describing what happened to those “arrested” by Squad Bada’r, including two of her trans friends.

“It’s a prayer to repent, in front of people. It’s humiliating. They also bring people to the graveyard and lecture them for almost two hours and make them pray there as well.”

Nadia said one of her friends “fought back and talked back, and they proceeded to cut her hair with a pair of scissors.” She maintained that police were aware of the group’s activities but have not taken any action against them.

The leader, she said, was an ustad (religious teacher) and used a Facebook group to solicit donations, including vehicles to carry out the “arrests”. As a result of Squad Bada’r’s unimpeded vigilantism and its stated goal of “eradicating” trans women from Sungai Petani, Nadia said, “I’m afraid to go out in public areas.”

“Not once has the government said, ‘stop causing violence against this community.’ It’s so basic, you know? Why can’t you just say that?” said a communications professional who follows LGBT issues, in the report.

Last July, Malaysia was among the minority of 17 countries that voted against a United Nations Human Rights Council resolution on the protection of sexual minorities from violence and discrimination.

Disguising Violence In Facade Of Benevolence

“They say, ‘we need to approach them with kindness and guide them back to the right path’ but they do not say ‘stop the violence.’ They don’t want to recognise that violence is happening, maybe because then they can be held accountable,” said the communications professional.

Thilaga Sulathireh, co-founder of local transgender rights group JFS said statements that advocate for or profess a more humane approach create a facade of benevolence that undermines the struggles and suffering of the LGBT population.

“What it does in reality is that it disguises the violence into a compassionate sort of packet. And it also internalises these structural problems within LGBT people,” she said at a media briefing on the report last month.

“Because you don’t see the violence but the violence is turned within and it is internalised. Of course, then it’s a gentrified process, you see all sorts of clean images but then beneath there’s so many problems. So that’s one of the things that we see.”

Gavin Chow from the People Like Us Hang Out group said: “If we want to really look at whether LGBTQ persons in Malaysia are being protected, you don’t just look at social spaces where you can afford to spend some money and access some entertainment. You also look at the entire systemic structures — whether they are systems in place that can actually help LGBTQ persons when they need something.”