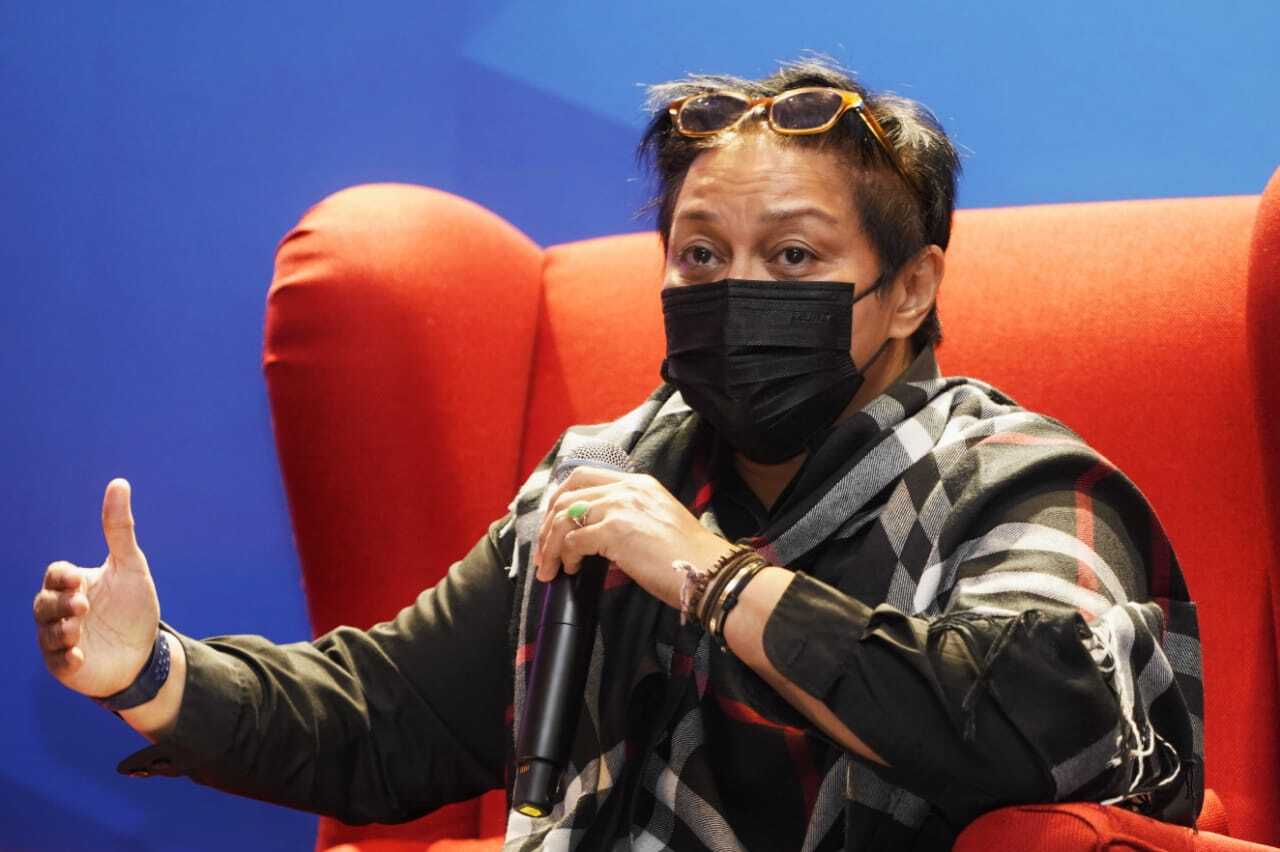 Pengerang MP Azalina Othman Said speaks at a conference in Kuala Lumpur on May 20, 2022, organised by the Galen Centre for Health and Social Policy, supported by Organon Malaysia, on "Tackling Unintended Pregnancies in Malaysia". Picture by Saw Siow Feng for the Galen Centre.

Thank you to the Galen Centre for Health & Social Policy and Organon Malaysia for the invitation to deliver the keynote speech for this afternoon’s conference on unintended pregnancies — not a subject matter that I am personally familiar with, but an issue of concern as it affects the lives and livelihoods of Malaysian women and girls.

Unintended pregnancy is a serious matter that needs to be addressed systematically. It is not merely an issue of health and human rights, it cuts across many other disciplines such as economics, law, religion, social and culture.

As Chair of the Parliamentary Special Select Committee on Women and Children Affairs and Social Development, as well as the Special Advisor to Prime Minister on Law and Human Rights, I have a special interest in the protection of vulnerable populations, and I am well aware that unintended pregnancies result in a rippling impact to families and communities.

But first let me qualify myself. The views expressed in this keynote address are my own, and not necessarily the views of my fellow MPs in the Special Select Committee, nor the Prime Minister.

As you have heard earlier, unintended pregnancies can lead to further cycles of high fertility, limit educational and employment potential, and prolong poverty.

There is a silent ongoing crisis. Fourteen in every 1,000 girls below the age of 18 are pregnant, an estimated 18,000 pregnancies annually, out of which 4,500 pregnancies are out of wedlock.

We are faced with an ongoing challenge of teenage pregnancies, underage marriages and children born to mothers who are children themselves. We are told that there are an average of nine babies reported abandoned each month.

We are not here to judge these girls. We are here to find solutions to better support them and women who have unintended pregnancies.

While we might find the thought of a family producing enough children to comprise half or even an entire football team amusing, the fact is that women who are unable to plan their pregnancies are often socio-economically disadvantaged and put their health and wellbeing at risk.

In many of these families, parents decide which child should go to school, and which to stay home to help the family. Often the girl-child loses out, in some cases, to be married off to a much older person.

While Malaysia has many protective laws in place for the protection of women and children, all of us in this room knows that at the implementation level, we still face many challenges.

Case in point, while I am proud to have reached an important milestone during my tenure as Law Minister by putting Malaysia on the map as the first South East Asia country with the Sexual Offences Against Children Act, and the Sexual Crime Court Against Children, I am not so proud of the fact that implementation of the law is not yet at the level where we can all be assured that all children who are victims of sexual crimes will get timely legal redress.

Without legal redress, there will be no deterrence effect against such hideous offences. The judiciary needs to honour the one-year timeline in convicting the perpetrators, but in doing so we need to go to the root of the problem.

Capacity building of both specialised judges and prosecutors is needed, training for authorities on child-friendly laws and victim centric procedures is essential, as well as adoption of best practices in order to minimise secondary harm to the victim.

The impact brought about by unintended pregnancies include infant abandonment, infanticide, and abortion. When this occurs, women and girls are often disproportionately penalised by society. We never hesitate to punish women or girls who have committed an act out of desperation or panic, such as abandoning the baby.

At present, we don’t even explicitly allow abortion for victims of sexual crimes, although in 2002, the National Fatwa Committee had issued a fatwa which permits abortion up to 120 days of gestation for cases involving rape victims. However, the fatwa is  not gazetted, and the Penal Code still applies.

The Penal Code only allows for abortion in two situations – lack of physical safety and mental soundness. This puts disproportionate burden on the victims, creating unimaginable harm to the lives of these vulnerable women and girls.

Another recent example in our country concerns a 15-year-old girl investigated for killing of her new- born baby in Terengganu in February 2022. Disturbingly, the immediate action taken by authorities was to detain the child while the child was still in the neonatal ward and recovering from post-natal shock.

The child was detained and charged with murder under Section 302 Penal Code and was not accorded the benefit of any legal representation, or psychological assistance until much later. Much debate on this case ensued.

Civil society organisations highlighted that even if she is to be charged, Section 309A (infanticide) would have been a much suitable course of action, instead of the non-bailable offence of murder, as it deals with the intentional killing of infants by reason thereof the balance of her mind was disturbed.

This, again, highlighted the adverse impacts brought about by gaps between legislative intention and the implementation of it. This particular case exemplifies the traumatic consequence of an unintended pregnancy.

The cause of this lies in society’s perception towards these women and girls, treating them as offenders instead of victims.

Like it or not, this somewhat relates to certain religious interpretation, which in my opinion, common consensus on human rights could surely be met, and kindness, forgiveness and compassion towards all will always be the priority, in all religion.

From a social-economic perspective, women and girls are paying the price for a lack of or uncertain access to comprehensive sexuality education, essential reproductive health services and modern contraception in Malaysia, especially for lower-income households.

This has undoubtedly left them trapped in the vicious cycle of poverty, lower education, low income, and low mobility.

Poverty is an intergenerational issue. It will be passed on if no drastic changes are made, either by the community themselves or by the government. As such, tackling the issue of unintended pregnancies does not only concern protection itself, but also concerns nation building as a whole, as no one can be left behind.

Generally, we need non-judgmental legal and social support services which do not moralise or prosecute individuals under their care for their actions which result in unintended pregnancies, such as sex out of wedlock.

We need to identify and review existing legislations which currently create an environment of stigma and discrimination towards those experiencing or dealing with the consequences of unintended pregnancies.

The Attorney General’s Chambers and the Judiciary should be sensitised to the provisions under the Child Act 2001. Reforms both in terms of legislation and strengthening of human rights frameworks are needed to protect and improve access to contraception so that women can choose and plan their pregnancy. Recent events have shown that we cannot take such issues for granted.

Today, women and girls in almost every country are standing up for their rights. There is growing recognition that respecting women’s reproductive rights leads to lower rates of maternal death and disability, to healthier children and families, and to stronger societies and economies. Reproductive rights are fundamental to gender equality and women’s empowerment.

If we can give girls and women the right to own their bodies, they can own their future.

We know that we need to do more when it comes to family planning and that we need to take a comprehensive approach to sexual and reproductive health and rights for women and girls. There should be no room for half measures. The challenges of sexual and reproductive health and rights are more important to address than they have ever been.

Because of this, your work is crucial, to hold the line on women’s rights. Our rights are not bargaining chips or up for negotiation. We need to keep on speaking out and support each other while doing so.

This is Pengerang MP Azalina Othman Said’s keynote address on May 20, 2022 at the “Tackling Unintended Pregnancies in Malaysia” conference organised by the Galen Centre for Health and Social Policy, supported by Organon Malaysia, in Kuala Lumpur.