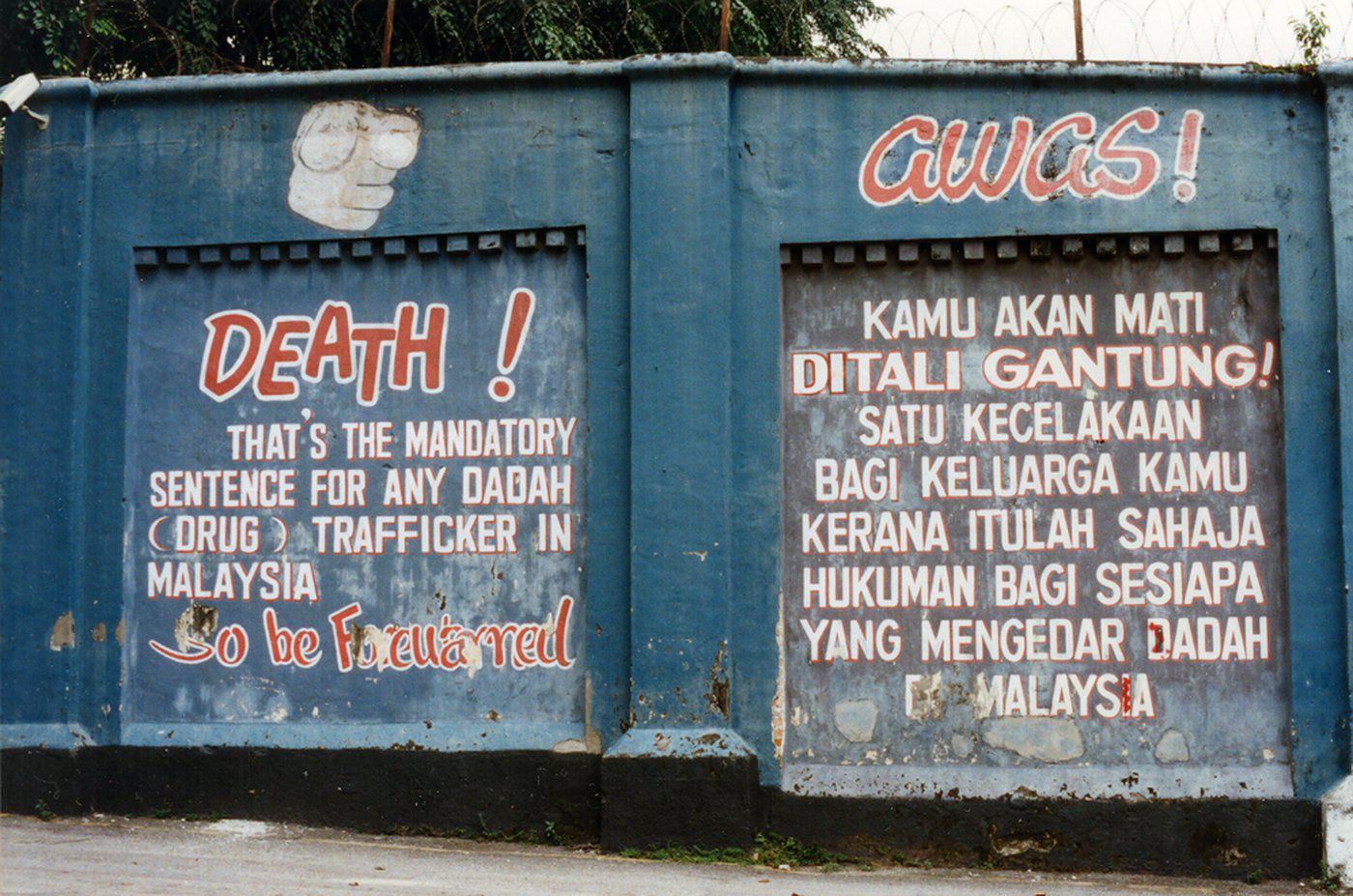 The mural of the now demolished Pudu Prison in Kuala Lumpur depicts a grim warning against drug traffickers. (Wikimedia Commons)

By Lucy Harry, University of Oxford

OXFORD, August 29 – A video of a 55-year-old single mother crying uncontrollably after being sentenced to death last year for possessing 113.9 grams of methamphetamine ignited heated online discussions about women’s rights and capital punishment in Malaysia.

Under Malaysia’s Dangerous Drugs Act, those found guilty of possessing over 50 grams of methamphetamine face a largely mandatory death sentence. Critics note that the impact of the harsh penalty is often borne by the marginalised, especially vulnerable women.

The high ratio of foreign nationals facing death is an established trend. Between 1983 and 2019, 90 per cent of the women sentenced to death for drug trafficking in Malaysia were foreign nationals — typically from less affluent countries in Southeast Asia or other states in the global south, such as Thailand, Indonesia, the Philippines, China, and Iran.

Another pattern: the foreign national women sentenced to death are generally economically precarious, in positions where they were vulnerable to being duped or coerced. They are not major profiteers in the drug market and do not fit the profile of the ‘worst of the worst’ offenders.

Many claimed to have been duped into smuggling drugs. Indeed, 65 per cent of the women who were arrested at the international border said they were paid or asked to courier items internationally at someone else’s request or were transporting supplies for their own small businesses, and unbeknownst to them, drugs were concealed among the packages.

The transnational informal trade of goods is known as ‘suitcase trading’ and is dominated by women from the global south who may be excluded from the mainstream economy, leading them to seek informal and entrepreneurial income-generating activities.

In other instances, women were caught drug smuggling while they were travelling abroad for work in a female-dominated industry – such as  domestic workers or masseuses. Drug syndicates seem to be capitalising on the ‘feminisation of migration’ in the region and exploiting women as unwitting drug couriers.

Women are also subjected to deplorable conditions while incarcerated on death row in Malaysia. They are held in solitary confinement for up to 23 hours per day and without access to programmes or work opportunities in prison.

Foreign national inmates may not speak the language of the prison officers and may struggle to receive assistance from their consulate. There is also no access to gender-specific healthcare while on death row.

The Malaysian government confirmed in June 2022 that it would abolish the mandatory death penalty, including for drug trafficking.

In other jurisdictions that have abolished the death penalty, it has been replaced with a term of imprisonment. It is recommended that the prison sentence be assessed on a case-by-case basis and proportional to the crime; sentencing guidelines minimise the risk of arbitrary sentencing.

Gender-sensitive drug policy reform would take into account the socio-economic factors that precipitate women’s involvement in drug trafficking, such as any history of gender-based violence, if they were coerced or influenced, possible drug dependence and/or mental illness, and whether they engaged in drug trafficking to fulfill their responsibilities as a sole breadwinner.

Dr Lucy Harry is a post-doctoral researcher at the Death Penalty Research Unit (DPRU), University of Oxford. Her research focuses on the death penalty for drug trafficking in Southeast Asia, with a particular interest in gender-based perspectives.