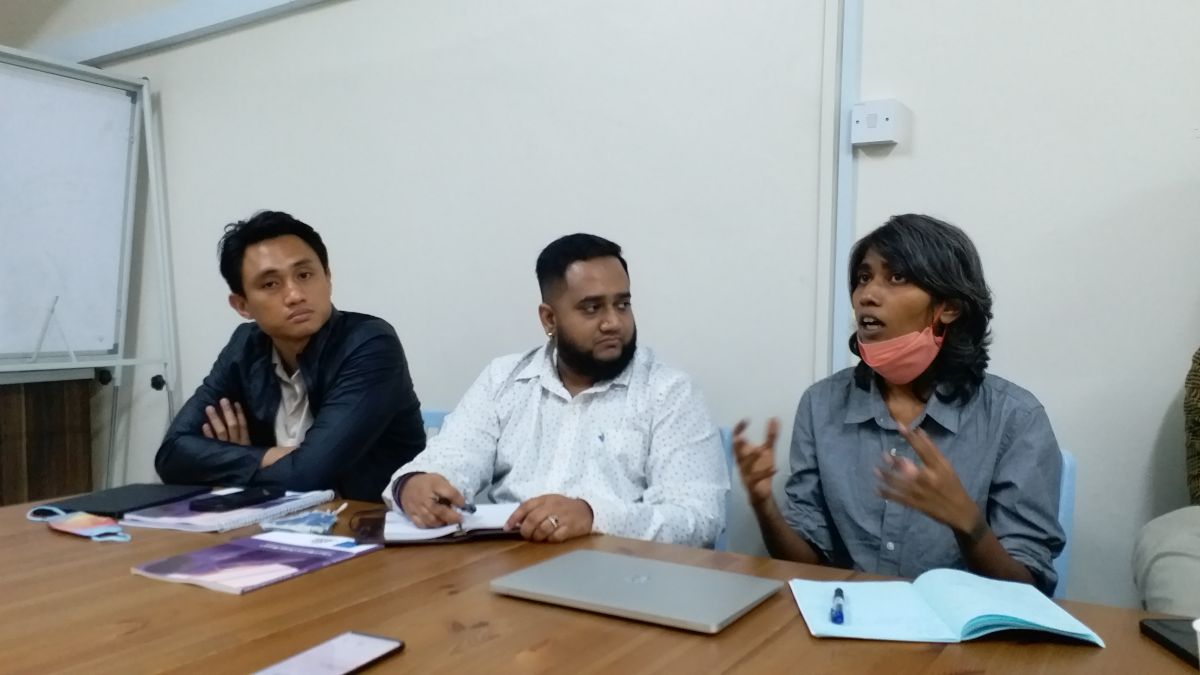 Saiful from Jejaka, Dorian Wilde from JFS, and Thilaga Sulathireh from JFS at the launch of the “I Don’t Want to Change Myself: Anti-LGBT Conversion Practices, Discrimination, and Violence in Malaysia” report. Photo by Najua Ismail.

KUALA LUMPUR, Sept 2 — A report revealed an intersection between conversion practices in Malaysia and HIV/AIDS, where taxpayer-funded programmes portray the disease as a punishment for the “sin” of being gay or trans.

“[These NGOs] are really, in a way, helping them to standardise the message that if you are a person living with HIV, you have to repent,” Saiful told a recent media briefing on a report by the global Human Rights Watch (HRW) group and local trans-rights group Justice for Sisters (JFS) titled “I Don’t Want to Change Myself: Anti-LGBT Conversion Practices, Discrimination, and Violence in Malaysia”.

They will tell us that getting HIV is the punishment for our sins, he added. “Because in religion, if you do something sinful, you are to be punished, so this is the punishment in this world. This is one of the ways they penetrate the LGBT community to expand their ideology and suggest conversion therapy as the way forward.”

Saiful only wanted to be identified by his first name.

“One of the things that the report points out is that in terms of the state-funded LGBT programmes or some of the conversion programmes, they do fall under the National Strategic Plan to End AIDS 2016-2030, so you can actually find the mukhayyam programme in the action plan”, said JFS co-founder Thilaga Sulathireh.

Mukhayyam, which promotes conversion practices that have been denounced by the global scientific community, is listed as a psychosocial support programme under the key activities of the National Strategic Plan to End AIDS 2016-2030, prepared by the HIV/STI section under the Disease Control Division of the Ministry of Health (MOH).

It is described “as a programme under JAKIM (Department of Islamic Development Malaysia) mainly conducted for Muslim TG (transgender) groups in Malaysia. The activities are focusing on voluntary participation, empowerment, self-motivation and spiritual well-being that help to reduce internal stigmatisation.”

“So, there is an intersection between conversion practices in Malaysia with HIV/AIDS. And like Saiful was saying, this is how the linkages have been built,” Thilaga said.

In the plan, one session of mukhayyam per state per year is listed as a target for behaviour change with the aim to minimise the risk of acquiring HIV and STI infection through spiritual support and guidance. In a footnote, the plan also states that one of the objectives of mukhayyam is to encourage men who have sex with men (MSM) to “abandon the practice of unnatural sex.”

According to the JFS and HRW report, a trans activist named Sofia, who attended a session of a mukhayyam in Johor in 2015 aimed at MSM because of her work with a HIV prevention organisation, was asked: “When are you going to go back to your nature?”

Sofia recalled that the organisers “used scare tactics, showing videos of a natural disaster, suggesting that if you’re against God, this will happen… They said fitrah (innate nature) is always binary and that same-sex relationships are bad, and they relate it to the prophet Lot.”

Another person named Farah in the report, who also works in the HIV field, said she was stunned at the mukhayyam’s approach to HIV prevention. At a retreat in Cameron Highlands in 2018, she said, “they used a slideshow without blurring the face of the person living with HIV and I was so shocked. We work in the HIV field, and I was speechless.

“(My colleague) and I stood up and said, ‘What is this? This is about ethics, why did you not blur the face?’ The session was on repentance of the community. This is to scare us—if you’re a mak nyah (transgender woman), you’ll get HIV. If you’re a mak nyah, you’ll die of HIV.”

Azim, a gay man who attended a mukhayyam programme in December 2017 facilitated by the Kedah Islamic department, said facilitators stoked fears that LGBT people would go to hell if they did not repent.

In the report, Azim describes his experience at the programme: “To make us change, they remind us about death. ‘Oh, when you’re dead, what happens?’ There was an activity, a visualisation or reflection. There’s a white piece of cloth, kapan, at funerals when Muslim people die. They covered everyone with this cloth.

“They created a funeral-like atmosphere with incense. They asked us to think about our childhood and growing up, and also to think about death. They also had background sounds that were scary and horrible. It made people start to cry.”

According to the HRW-JFS report, the Malaysian AIDS Council (MAC) initially partnered with JAKIM in organising mukhayyam, seeing it as an opportunity to conduct HIV prevention work. But evidence suggests that the programme does little to educate or prevent HIV.

One activist is quoted in the report saying, “They approached (our group) and we rejected it. They had already prepared the module without consulting us. The way we saw the module, praying and everything, it had nothing to do with HIV.”

The partnership was eventually dissolved, with MAC providing a formal statement in December 2018 that denounced conversion therapy:

“LGBT conversion therapy is universally rejected by the global scientific community, not only for lacking scientific merits and its dubious methods to ‘cure’ non-heteronormative sexualities, but also for its harmful effects on any individual resulting in emotional (an in some cases, physical) trauma without any of its desired ‘curative’ outcomes.

“Propagating conversion therapy only fuels stigma, fear and discrimination against LGBT people, a key population that is disproportionately affected by HIV/AIDS in Malaysia. It has absolutely no place in ending AIDS.”

The issue of HIV is weaponised in programmes like mukhayyam, which frames HIV/AIDS as a form of retribution against “sinners”, said Thilaga at the media briefing. “Of course, this is a social construct. It is extremely inaccurate to say that we are sinners.”

Yesterday, family medicine specialist Dr Suhazeli Abdullah, who is a member of the Malaysian Medical Council (MMC) that regulates the medical profession, tweeted an MOH graphic showing that new HIV infections in Malaysia are now mostly driven by sexual transmission, more than half of which are among MSM.

“We as Malaysians should feel sad and grieved that this phenomenon is happening in our country that has been independent for 65 years. However, our spirit is still not liberated with the issue of infectious disease like HIV. The cause of this is our own lax attitude,” the MMC member tweeted in Malay.

Dr Suhazeli was retweeted over 1,000 times, with many homophobic comments.

Both Malaysian and international HIV/AIDS activists and infectious disease experts have repeatedly advocated a rights-based approach to managing the epidemic.

Infectious disease physician Dr Adeeba Kamarulzaman told CodeBlue in a recent interview that Malaysia can eliminate HIV/AIDS by 2030 by investing in digital self-tests for HIV and expanding access to immediate treatment and pre-exposure prophylaxis (PrEP), a medicine that can prevent the risk of getting HIV by 99 per cent.