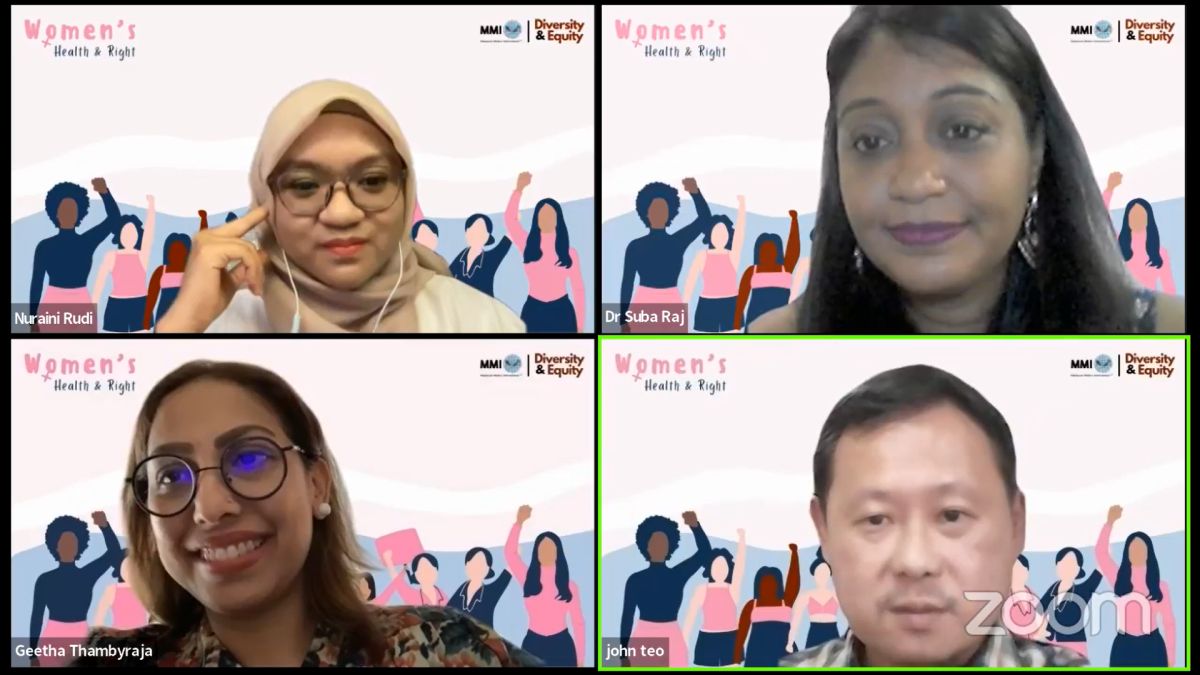 The panel of speakers at the Women’s Health and Rights forum by Malaysian Medics International.

KUALA LUMPUR, April 26 – Sexual and reproductive health are areas of health care for women where accessibility is still a challenge, largely due to gender discrimination and stigma, experts said.

Lack of access and an ingrained societal bias against women have larger and far-reaching implications, including rampant teenage pregnancies and child marriages.

At a forum on Women’s Health and Rights organised by Malaysian Medics International (MMI) on April 2, Dr Geetha Thambyraja, a consultant obstetrician and gynaecologist, said that reproductive health is always associated with sexual relations, which creates stigma around it.

“Women are fearful of the stigma so they avoid such services,” she said, adding that stigma can cause women to have fear, anxiety and even go into depression.

“They may have a problem but because of these barriers which have been imposed upon them, some of them because of cultural and religious beliefs, they are afraid to come and get these services.”

In such cases, the delay in diagnosis and treatment could lead to even more detrimental problems, including teenage pregnancies and the need for abortions.

Based on her observation from 10 years of practice in both the private and public sector, Dr Geetha said pregnant teenagers tend to suffer the most from stigma.

“They have a sense of sadness in their eyes. They don’t look at you when they are with you because they look as if they should feel guilty for something that they did.”

According to her, the number of teenage pregnancies in Malaysia now stands at a staggering 18,000 per year.

“Many more are not accounted for. That means we have 50 deliveries a day by teenage girls. And one baby is being dumped every three days.”

Many of these teenaged girls don’t have any family support, she maintained. “They come from halfway homes. Generally, they look very lost. It’s heartbreaking to see them go through labour and delivery by themselves, of course with a third party present.”

She said the high number of pregnant teenagers indicate that there is an unmet need for family planning requirements in the country.

“I think only 10 per cent of teenagers use contraception,” said Dr Geetha, adding that comprehensive sexuality education can play a big part in reducing the number of teenage pregnancies.

However, sex education in Malaysia is still not comprehensive enough, said Nuraini Rudi, a sexual and reproductive health advocate.

According to the United Nations Population Fund (UNFPA), comprehensive sexuality education must comprise eight key concepts: relationships; value, rights culture, sexuality; understanding about gender; violence and staying safe; skills for health and well being; the human body and development; sexuality and sexual behaviour; as well as sexual and reproductive health.

Nuraini maintained that when she compared the eight key concepts to the sex education she received in school, she realised that the curriculum came up short.

“Back in my time, we learned about sex education in the subject Pendidikan Jasmani dan Kesihatan. It was a physical education subject, but the topic (sexuality education) was not addressed by the teachers, I think because they lacked the training and were not prepared to give this kind of information in a good manner, without imposing their beliefs.”

Addressing the audience of mostly medical students at the MMI forum, Nuraini said self-education is crucial, given that it takes time for the relevant parties to update the modules on sexuality education in the country.

“Read and make yourself uncomfortable because when you are uncomfortable, you are able to learn more from there. And then go to the community and tell them the things they should know. Rather than waiting for LPPKN (National Population and Family Development Board) or whoever else is responsible to start sex education for us, we should start now with whatever we have.”

Many young women who come into her practice seeking services for contraception, abortion and screening for sexually transmitted diseases are wary, said Dr Geetha.

“These young women usually come in feeling conscious about questions they want to ask, they ask to be discreet about it, they’re always worried about being judged and discriminated against.”

The shame that women display about their bodies and owning their health care rights can also be attributed to societal prejudice against them.

She said child brides sometimes look to their doctors for support. “Just two weeks ago, we helped a 17-year-old girl deliver her second pregnancy. She had her first when she was 13 or 14. She is married to a 31-year-old man. She has no clue about what’s happening to her body.

“She has no clue about all the changes she is going through. And with motherhood and having another child… when you talk to her, she has no idea what she is going to do.”

According to Dr Geetha, in such cases, health care providers can only support child brides by giving them the best service and treatment.

“And I think sometimes it’s the follow-up care that also matters. We want to see them again and help them with their future fertility issues and all the other issues that they may have in terms of gynae problems and things like that.”

Dr John Teo, an obstetrician and gynaecologist based in Sabah, said there are two important facts to keep in mind about child marriages. Firstly, most teenage and adolescent pregnancies are unplanned.

Secondly, under Malaysian law, when a man has sexual intercourse with a girl below 16 years of age, with or without her consent, it is considered statutory rape.

“We have to be clear about the law as well,” maintained Dr Teo.

However, Dr Subatra Jayaraj, who has experience in anaesthesia and intensive care in the Ministry of Health (MOH), said the issue of child marriage is complex because aside from the law, there are cultural and economic issues to consider as well.

She maintained that there is no avoiding cases involving child marriages as a medical practitioner in the country.

“When I was in anaesthesia, my youngest patient that I gave spinal anaesthesia for a Caesarean section was 14 and her partner was 31 as well. There’s this huge range in ages, that’s the concern. If you work in Malaysia, you will definitely come across these cases.”

However, she says there were also cases that provided glimmers of hope. She cited the case of a 17-year-old who came to her for assistance. The girl had a partner who was only a year older and she was about to sit for her exams.

“She was planning to take the STPM as well and the couple knew they didn’t want to start a family until she finished her STPM. And that was at least in three years’ time,” said Dr Subatra.

“So our job is to give her information and access, and she became one of my most dedicated patients on Depo. Depo is a contraceptive injection and I’ve been giving her Depo injections since she was really young.

“So this shows we can provide options, information and give them the choice. And when given choices, I think we need to trust women to make the decisions that are best for themselves.”

During the MMI forum, a question was asked about why there were so many contraceptive methods for women compared to men, and if this reflected a bias against men.

“If a pregnancy occurs, does it occur in the women or men?” asked Dr Teo in response to the question. “If it occurs in the woman, shouldn’t she have total control about whether she wants to get pregnant or not? So, that’s why there are so many methods for her to control it.”

He added that men were less likely to make use of contraceptives given that they do not suffer the consequences of their sexual activities.

Dr Geetha added that she has come across many cases where men are quick to agree to contraception for their partner, but baulk when it is suggested for them.

“There are many times we talk about bilateral tubal ligation to our patients as a permanent choice of contraception. The men are quick to say “ya boleh, boleh, boleh ikat (yes can, can, can tie it up),” she said, referring to the procedure for women to permanently prevent pregnancy.

“But when you turn to their husbands and partners, and say there’s another thing we can easily do, let’s do a vasectomy. Oh, no, no… they are out of the room as fast as they can!”

Vasectomy, a permanent form of male birth control, is done by cutting and sealing men’s tubes that carry sperm.

Dr John agrees that a vasectomy is faster, easier, cheaper, and safer. “So, a bilateral tubal ligation should be the last option. It is much more difficult to reach the tube inside the women than the men,” he explained.

“Of course, there are other methods like long-acting reversible contraction and so on, but if you want to do permanent contraception, then vasectomy should be the first choice.”