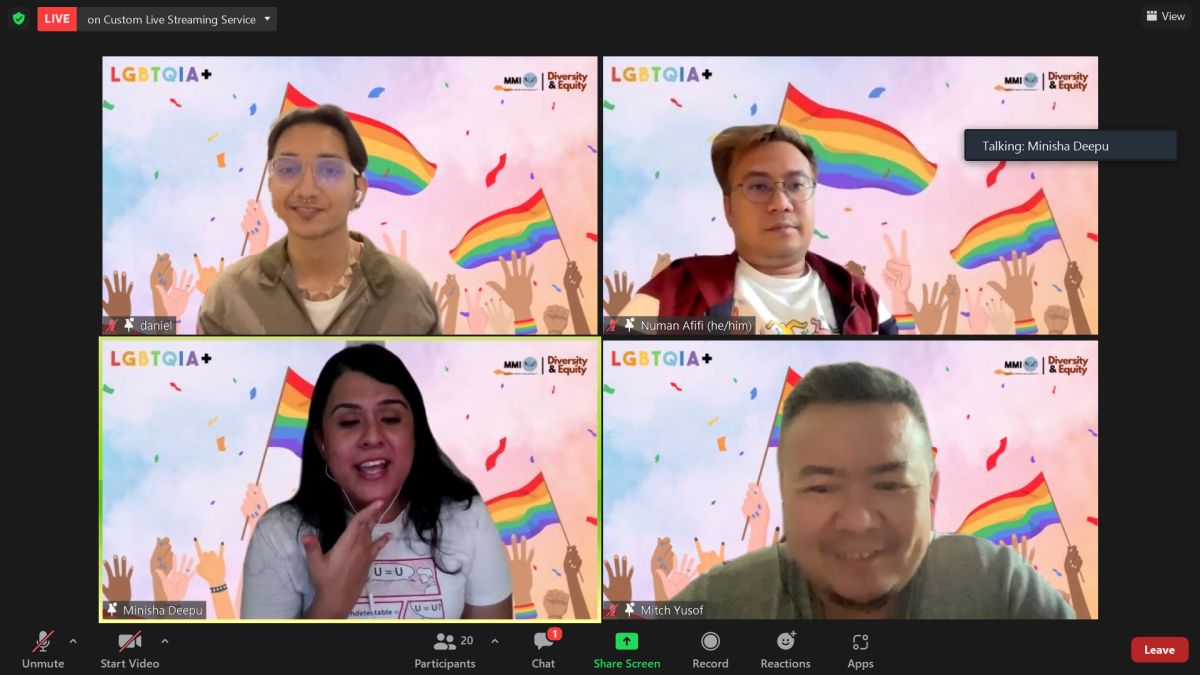 KUALA LUMPUR, April 18 – Transgender activists have raised problems of stigma and discrimination hindering access for LGBT individuals to HIV testing and therapeutics, as well as overall health care beyond HIV/AIDS in Malaysia.

Mitch Yusof, executive director of transgender group SEED, said the country must have difficult conversations about the overwhelming health disparities and inequities confronting the transgender community in order to understand the challenges, stigma and discrimination they face in accessing the Malaysian health care system.

“Discrimination in medical settings happen and that is a fact,” said Mitch during his keynote speech at a webinar held on April 9, 2022, which was organised by Malaysian Medics International on ‘LGBTQIA+: Discrimination and Stigma’ as part of its Diversity and Equity Initiative Campaign.

He maintained that transgender people are subjected to discrimination from the get-go. From the moment they register at the counter, which they have to do according to their “dead name” through the entire health examination process, and even upon ward admission, they are faced with the prospect of being viewed and treated as a “showcase” by and for medical professionals, including inquisitive student doctors and nurses.

“Sometimes a laughing showcase,” said Mitch, who explained that a dead name is the birth name of a transgender person. “It may not be the name that they have as part of their gender transition.”

According to him, not much research has been carried out to explore the factors that prevent delivery of quality medical and health care to the LGBTQIA (lesbian, gay, bisexual, transgender, queer, intersex, asexual) community.

“Are medical practitioners uncomfortable in providing treatment to the transgender community? Is it the inadequacy of training on trans specific health care? Or is it the existence of anti transgender and transphobic policies in the health care system?”

In examining these issues, Mitch maintained that studies should also be conducted to determine the knowledge and biases of the existing medical workforce in Malaysia, including medical students, physician trainees, practising physicians and other health care workers, in providing health care services to the LGBTQIA community.

“Many medical professionals or health care providers continue to hold explicit and implicit biases that overshadow their medical judgement, which should be only to serve the best interests of their patients,” he said.

Minisha Deepu, a trans activist, said trans inclusive health care is not sanctioned by the government, which is why non-government organisations (NGOs) and community-based organisations mostly focus on addressing the problem of HIV and AIDS.

“When it comes to the LGBTQIA community, it’s all about HIV, HIV, HIV,” said Minisha. “That’s the only health care that MOH (Ministry of Health) approves for us.”

However, even within the ambit of HIV health care, the LGBTQIA community still have to contend with many challenges, including the insidious spectre of stigma and discrimination.

There are still many from the transgender community who are afraid to come forward for testing, said Minisha.

“Some of them, they know they are positive but they don’t want to come for treatment because of fear of stigma and discrimination in health care spaces and that needs to change.”

Minisha said that she was once asked about her HIV status by a nurse when she went for a screening at the clinic. “I think that it is not proper for a nurse to ask me that because the results of my screening should be between me and my health care provider, the doctor.”

While she acknowledged that the question may have been innocent and not because of stigma, the frequent discrimination faced by the community makes it difficult to tell the difference. Minisha maintained that health care workers need sensitivity training for interactions with people from the LGBTQIA community.

“It may not be a stigma but because of the hate messages going around in social media. TikTok is one of them, I see it every time. HIV people are still heavily discriminated against.”

“Some LGBTQIA people might be more privileged. They may have more money to go to private clinics. But how about people who cannot afford it?

“Although there are NGOs that work on HIV in each state, they are based mostly in the cities. If you’re from a rural area, there’s a long journey you have to take if you prefer community based testing.”

Similarly, most providers of pre-exposure prophylaxis (PrEP), a medicine for prevention of HIV from sex and injection drug use, are based in the Klang Valley. PrEP is considered to be highly effective in preventing HIV when taken as prescribed.

“When we talk about HIV, a lot of people will just talk about safe sex using condoms,” said Minisha. “PrEP provides an additional layer of protection, which is very useful in protecting against HIV transmission.”

However, PrEP access is not available in some parts of the country, particularly in the rural areas.

“I know somebody who travelled all the way from Johor to KL for PrEP and when she got to the community clinic, the doctor was on sabbatical,” said Minisha.

“People have to spend out-of-pocket (OOP). OOP expenses have become large,” said Numan. “If you rely on all these medications, it will affect your livelihood.”

At public health care facilities, people from the transgender community are given a hard time when they ask for PrEP. “When we go to government hospitals and clinics, they will say, oh, PrEP is only for pregnant women,” said Minisha.

Not everybody can afford PrEP, she maintained, adding that prices for PrEP in private clinics vary. She said the government should consider the underprivileged in determining access to PrEP.

“This is HIV health after all. Health care is for all. There should be no discrimination, you have to give it to everyone.”

MOH reported that by the end of 2020, about 87 per cent of an estimated 92,063 people living with HIV (PLHIV) in Malaysia were aware of their status, 58 per cent of reported PLHIV were receiving antiretroviral therapy, and 85 per cent of those on antiretroviral treatment became virally suppressed, or 87-58-85.

MOH attributed Malaysia’s failure to meet the 90-90-90 goals to the shift in the local HIV epidemiology landscape from needle-sharing to sexual transmission, and also to stigma and discrimination faced by PLHIV that impedes efforts to link newly diagnosed PLHIV with care.