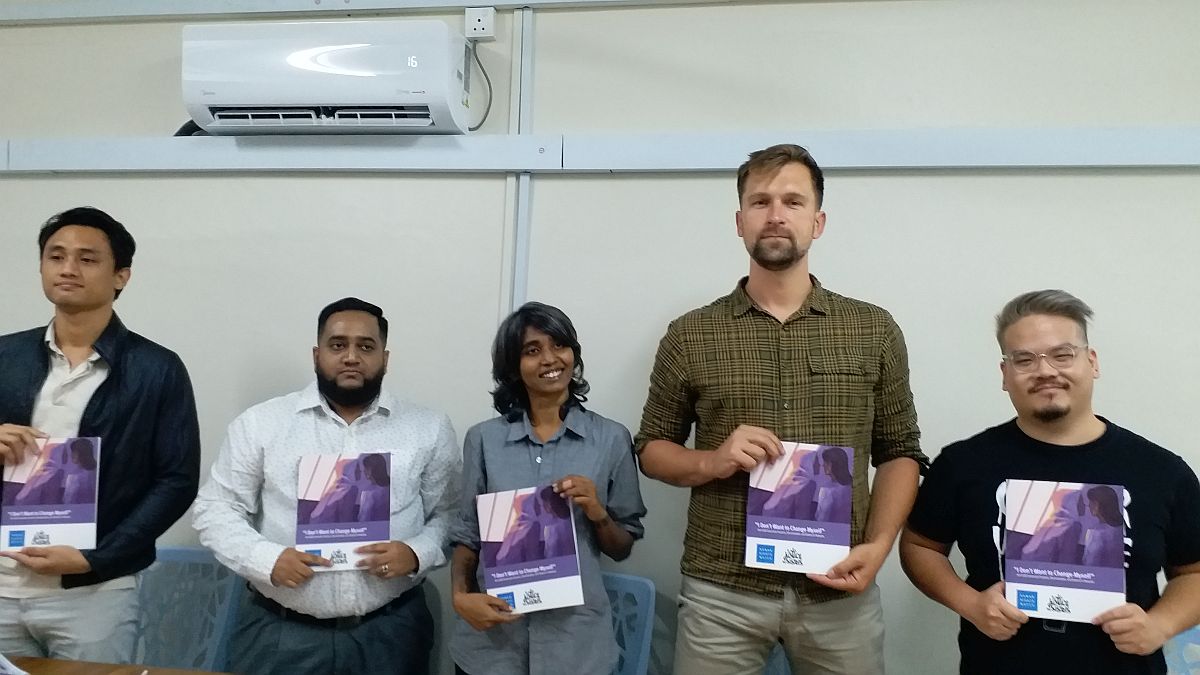 Thilaga Sulathireh (3rd from left), Kyle Knight (2nd from right) and other LGBT activists holding a copy of the report, “I Don’t Want to Change Myself: Anti-LGBT Conversion Practices, Discrimination, and Violence in Malaysia.” Photo by Najua Ismail.

KUALA LUMPUR, August 11 – “I was shamed. I was told that I will turn into a paedophile (and) grow up to have sex with young boys. And that my spirit was weak,” said Darren Tan, a 28-year-old gay man from Johor.

“It was very traumatic. I was pinned down and people were praying over me, cupping the side of my head, (they) shouted at me to get the demons of possession out of me. I was shaking and thought it was working.”

This account of a Christian exorcism Tan endured at the age of 15 to rid him of homosexuality is an example of conversion practices in Malaysia highlighted in a new report titled I Don’t Want to Change Myself: Anti-LGBT Conversion Practices, Discrimination, and Violence in Malaysia by Human Rights Watch (HRW) and Justice for Sisters (JFS). The 91-page report was released yesterday.

The report explains how conversion practices across Islam and Christianity in the country lead to suicidal attempts and self-hatred among lesbian, gay, bisexual, and transgender (LGBT) individuals.

Conversion practices are sustained and deliberate efforts to change a person’s sexual orientation or gender identity, according to the report.

These practices are often referred to as “conversion therapy”, although they do not have therapeutic value, and have been rejected as harmful by leading global medical associations, often taking place outside of health care settings.

Organisations like the World Medical Association, and the Independent Forensic Expert Group (IFEG), which functions under the authority of the International Rehabilitation Council for Torture Victims (IRCT), have denounced conversion practices, deeming it harmful, unethical, and a violation of human rights.

In the report, Tan said he underwent repeated exorcisms in two churches over a period of months. Eventually, he started experiencing suicidal ideation. “I thought to myself, if God lets me die, I will happily take it.”

“What this report tries to highlight is stuff that doesn’t necessarily make local headlines. We know from reading international news about the case of Nur Sajat, and about the cases of caning that made it to the international media,” Kyle Knight, senior LGBT rights researcher at global human rights group HRW, told a small media briefing at the launch of the report here yesterday.

“But what this report does is, it goes a little deeper and it talks about the daily humiliations that LGBT people face. The hostile social environment that is created by really, really negative laws.

Nur Sajat, a trangender woman, was granted asylum in Australia after she was wanted by religious authorities in Malaysia for “insulting Islam” because she was dressed in women’s attire at a religious event.

“The report looks at the relationship between criminalisation and conversion practices both by the state and non-state actors, and the impact increasing anti-LGBT sentiments have on the well being and health of LGBTQI [lesbian, gay, bisexual, transgender, queer, and intersex] persons,” said Thilaga Sulathireh, co-founder of JFS, a local transgender rights group, at the media briefing.

“In this report, we interviewed people who have been subjected to conversion practices by the state and also non-state actors and it cut across different methods, not just religious methods but also psychotherapy methods through counselling and by medical practitioners, and such.

The government has funded retreats, known as mukhayyam, that aim to “rehabilitate” or change Muslim LGBT people. As of June 2021, the government reported that at least 1,733 people had attended these programs, according to the report.

“The programmes, while framed as compassionate, internalises societal and structural discrimination and foments self-hatred among LGBTQ and gender diverse persons and hostility among the rest of the population,” said Thilaga.

She explained that the report also documents why people actually attend government programmes for LGBTQ people.

“The report details the different reasons people access these programmes and it really counters the narrative that these people attend these programmes on a voluntary basis, as is constantly spewed by the general public.”

Among the reasons, Thilaga highlighted, is the lack of opportunities for LGBTQ people. “The only way they can access financial aid is through some of these government programmes.”

She added that some may also join the programmes because it’s the only way for them to “also socially connect with other people because they are either in an economically marginalised situation or do not have access to the different kinds of spaces.”

Thilaga maintained that people may say “what’s the problem with this if people are going there voluntarily?

“But can it be voluntary if people are living in such conditions and the only way for you to live your life is to assimilate into the majority culture…and here, it’s the heterosexual culture.”

Lawmakers at the federal and state levels should decriminalise same-sex conduct and gender diversity, HRW and JFS said.

They also urged officials to immediately stop supporting programmes that seek to “rehabilitate” LGBT people and publicly affirm the equality and dignity of LGBT people.