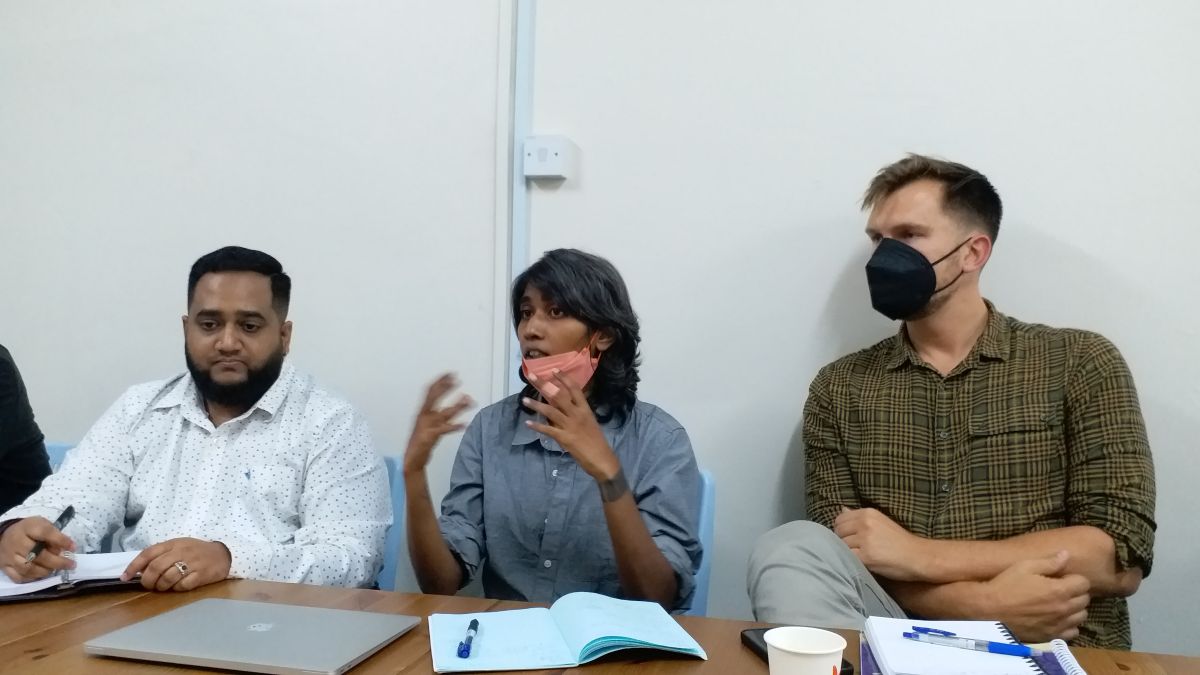 Dorian Wilde and Thilaga Sulathireh from Justice for Sisters and Kyle Knight from Human Rights Watch at a media briefing for the report, “I Don’t Want to Change Myself: Anti-LGBT Conversion Practices, Discrimination, and Violence in Malaysia.” Photo by Najua Ismail.

KUALA LUMPUR, Sept 13 — Malaysia is one of only 13 countries in the world to explicitly criminalise transgender people, according to a new report.

These provisions prescribe the punishment for “a male person posing as a woman” and vice versa, which includes fines, imprisonment, or both.

The report, “I Don’t Want to Change Myself: Anti-LGBT Conversion Practices, Discrimination, and Violence in Malaysia” by Human Rights Watch (HRW) and Justice for Sisters (JFS), also notes that Syariah enactments in nearly all Malaysian states criminalise both male same-sex conduct and female same-sex conduct with sentences of up to three years in prison, caning and fines.

Aside from legislation, fatwas (Islamic edicts) have also been issued against pengkids (girls and women who are masculine in appearance). Seven states including Johor, Kedah, Kelantan, Malacca, Pahang, Perak and Sarawak have issued such fatwas. Out of the seven, Johor, Kedah, Malacca, and Perak have gazetted their fatwas against pengkids, making it legally enforceable.

“So, for example, like a Malay, Muslim may be be subjected to Shariah law, rather than civil law.”

The “multiple intersectionality of laws” render LGBT persons vulnerable to prosecution in Malaysia, added Saiful who only wanted to be identified by his first name. “So they can be charged at different levels of the law.”

Based on the cases documented in the report, it is often state religious officials who are responsible for arrests related to gender identity and sexual orientation. However, there have been exceptions where federal police have gotten involved, including for raids on sex workers.

Raids On Homes And In Public Spaces

The report cites an incident involving the raid of a trans woman’s home in Kelantan in 2018 because neighbours reported that sex work was taking place in her home. She and her housemates were arrested and the trans woman was held for five days without being told what she was being charged with.

During interrogation, the first question police asked her was: “How many pondan are there in Kelantan?” Pondan is a derogatory term used to describe queer men, trans women, and gender nonconforming people assigned male at birth.

“The arresting officer told me, ‘you people when you’re like this, the Prophet does not even acknowledge your existence as a follower’,” said the trans woman in the HRW and JFS report. “They also asked me about my hormones: ‘What is this for? Why do you do this? Do you believe in God?’”

Police were also involved, in cooperation with religious authorities, in a raid on a gay bar called BlueBoy Discotheque Pub in Kuala Lumpur in August 2018. Following the raids, Federal Territories Minister at the time, Khalid Samad, released a statement saying: “Hopefully this initiative can mitigate the LGBT culture from spreading into our society.”

“The report provides an overview of the hidden and often invisible lives of LGBTQ people. We are talked about a lot in the public sphere, but then a lot of people don’t actually know what are the issues we face,” said Thilaga Sulathireh, co-founder of local transgender rights group JFS.

“And a lot of times, people think these laws in place in Malaysia do not have any impact because they are not used to arrest people every day. But this report actually shows the relationship between criminalisation and conversion practices and increasing LGBT sentiments in Malaysia – how it’s really impacting the lives of people.”

By tarring LGBT persons as criminals, the government has cultivated a climate of hostility towards them, which can result in arbitrary complaints from people in their vicinity. In one case, a lesbian couple had to literally uproot their lives following a complaint that brought the Department of Social Welfare (or its Malay acronym, JKM) to their apartment in Kuala Lumpur, according to the report.

Mikaela lives with her female partner and has custody of her two children from a previous abusive relationship with a man. In 2017, a JKM officer turned up at their home, claiming to be investigating a child neglect complaint.

“I cut her off and said, what do you mean I neglect my kids? These kids are at school right now, they go to music class every week, I send them to Friday prayer every Friday and wait outside the mosque for them,” said Mikaela in the report.

According to her, the officer responded: “Oh, no, there is another report saying there is deviant behaviour in the house.”

Mikaela managed to prevent the officer from entering her house that day and later explained to the welfare department that her reticence at allowing strangers into her home was due to the fact that she had just come off a bitter custody battle.

After that, she, her partner and two children moved out of their home for six months. Upon their return, Mikaela removed the family photos from the walls and packed them away. A separate bedroom was also set up to strengthen the charade that she and her partner were just housemates.

“The insecurity is still there,” she said in the report. “I feel like (the authorities) can just knock on the door and come into the house.”

Dorian Wilde from JFS said that while current laws discriminate against LGBT people by fining them and putting them in prisons, the absence of certain laws also makes them susceptible to discrimination and harm.

“Like legal gender recognition, that is not a thing in Malaysia,” he said.

According to the JFS and HRW report, discrimination against trans people is fostered by policies that prevent them from changing their names and gender markers on official identification documents.

While there are no laws that explicitly prohibit gender recognition for trans people, the report states that almost all transgender people who are known to have approached the National Registration Department to request such changes on their MyKad have been rejected.

Although Article 8(2) of the Federal Constitution prohibits discrimination against citizens on the basis of religion, race, descent, place of birth, or gender, Malaysia appeared to contradict this stand by voting against a United Nations Human Rights Council resolution last July on the protection of sexual minorities from violence and discrimination.

In its resolution, UN’s Human Rights Council urged countries to amend or repeal laws and policies that discriminate against certain persons on the basis of their sexual orientation and gender identity, and to take effective measures to prevent acts of violence and discrimination.

In this article:featured, malaysia