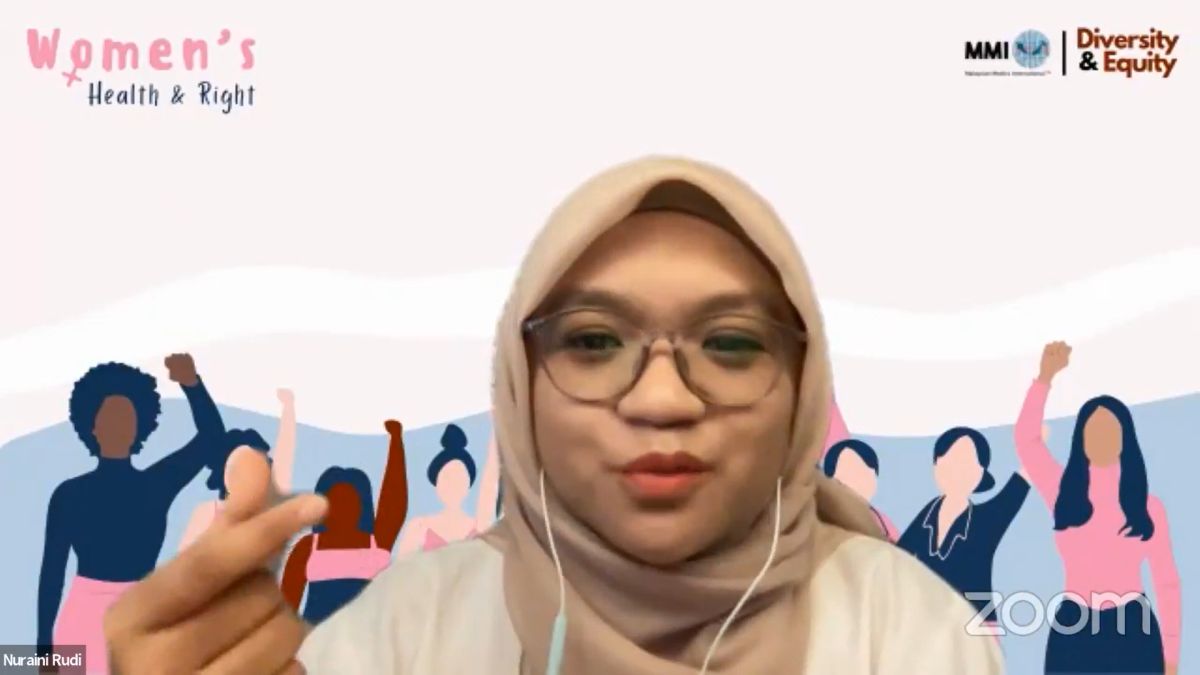 KUALA LUMPUR, April 22 – As long as sex and the human body remain taboo subjects, people will have trouble getting access to information and health care, said a sexual and reproductive health advocate.

While sex is widely discussed in print and broadcast media, there are still some topics that are considered off-limits such as safe sex, the importance of contraceptives, and risky sexual behaviours.

Without readily available information, teenagers, adolescents and young children will turn to the internet to find the information they want.

“And I think that’s when they will have a tough time seeking valid information because they don’t know where the good sources are,” Nuraini Rudi, who has worked with the United Nations Population Fund (UNFPA) and Federation of Reproductive Health Associations Malaysia (FRHAM), told a webinar organised by Malaysian Medics International on Women’s Health and Rights on April 2.

“So because of this, the younger generation tend to get ‘crowd diagnosis’ from social media.”

She said this can cause delays in obtaining a proper medical diagnosis and getting treatment, which can lead to public health issues.

The use of euphemisms when discussing body parts and talking about sex also contributes to the perception that these topics are forbidden or shouldn’t be discussed explicitly.

“We don’t use direct language for terms like ‘penis’ and ‘vagina’,” said Nuraini. “We are not comfortable enough to say it. In kindergarten, teachers mention the ‘bees and flowers’, and whatnot.”

The first step is for people to acknowledge their bodies and its various parts and functions, she said. “From there, having positive discussions can help the younger generation get better information that will enable good decision making.”

It is associated with a lot of self-guilt because you are taught that it is immoral, it’s a sin, it’s shameful. It has all these religious, spiritual, cultural taboos to it,” said Dr Geetha Thambyraja, consultant obstetrician and gynaecologist.

“It may involve the penis, scrotum, clitoris, vulva, breast and anus,” said Nuraini. “It can be done individually like myself alone, or with a partner but with consent.”

“It is known to reduce stress and tension, even depression. It has even helped people with fertility.

“In pregnant women, hormones heighten sexual desire and especially in advanced pregnancies, she may be uncomfortable having sex with her own partner. So, yes, it’s okay to relieve sexual tension that way.”

“Vaginismus means having difficulty with penetrative sex. So we do advise them to use vibrators, self explore, or use dilators to help reduce vaginismus and sometimes even overcome vaginismus.”

Virginity Is A Social Construct

Discussions about body parts and sexual activities are usually frowned upon, but topics like virginity should not be considered taboo as a broader discussion might yield some surprising insights.

“I think virginity itself is a social construct. And by that I mean it’s not something you can hold with your hand or see, but it is something that culturally exists.”

She said virginity is often used as a tool to rate the chastity of girls or the sexual experience of boys.

However, girls who have sex are deemed impure or immoral, while boys are more flatteringly referred to as “experienced”.

“Virginity is a tool to dominate and control female behaviour,” said Nuraini, who added that it is also a very heteronormative concept. “It only includes people who have vaginas or penises; it doesn’t include the other spectrum of people.”

Free Pads Only A Short-Term Solution To Period Poverty

On the subject of taboo topics, “period” is a word that stirs discomfort and even disgust because of the negative connotations associated with it. Periods are often deemed dirty, unsanitary, impure, embarrassing, and a hindrance to sexual intercourse.

“I think first of all we have to acknowledge that the menstruation cycle is part of the body’s natural process,”said Nuraini.

“I think I read somewhere that taboos about the menstruation cycle manifested as a way to cope with the period itself. But whatever the reason, the stigma and taboo is real and can affect the health, education, safety, and happiness of the people who get period.”

Period poverty is an issue that has only recently come to attention because girls who are skipping schools cannot afford sanitary pads. It is a problem that is not only happening in rural areas and in Orang Asli communities, but also occurs in poor urban communities, she noted.

To date, many of the interventions have focused on the short-term solution of providing sanitary pads for those who cannot afford it, she said. However, the problem warrants a more thorough study of the factors involved in period poverty.

“We have to look at period poverty from many angles like the sanitary product itself, knowledge about menstruation, education, access to it, and also privacy issues,” said Nuraini.

“I think this discussion is only spoken about during events like a flood, when flood victims have to share a big hall and do not have privacy.”

If the issue of proper period management is not taken seriously and addressed, it can lead to a larger health crisis among women, she maintained.

“In the medical field, we believe in evidence-based practices but we don’t have any research on this topic so we need to do more. And more positive discussion is still needed to remove the stigma itself.”