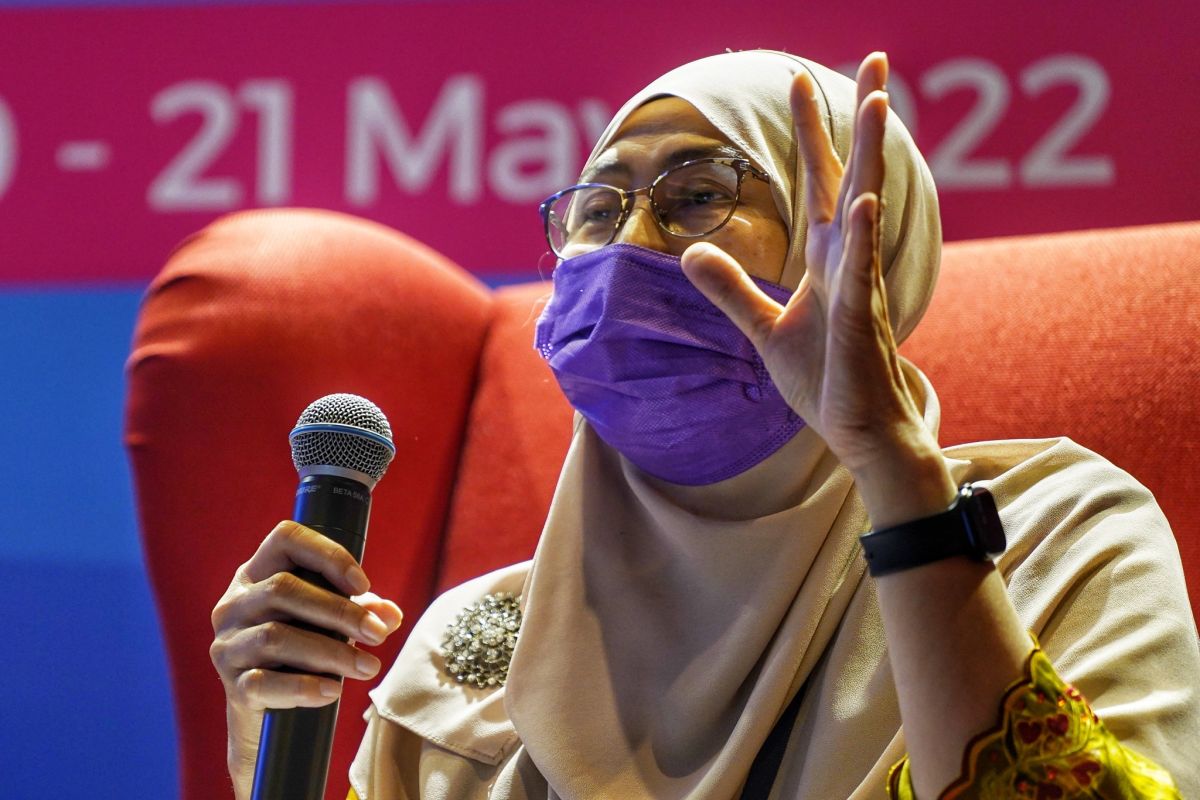 Dr Nik Rubiah Nik Abdul Rashid, a public health specialist at the Ministry of Health’s family health development division, speaks at the "Tackling Unintended Pregnancies in Malaysia" conference organised last May 20, 2022, by the Galen Centre for Health and Social Policy in Kuala Lumpur. Picture by Saw Siow Feng for the Galen Centre.

KUALA LUMPUR, June 14 – Dr Nik Rubiah Nik Abdul Rashid, a public health specialist at the Ministry of Health’s (MOH) family health development division, said that there are some myths about termination of pregnancies in Malaysia.

These include that the law or religion does not allow termination of pregnancies, or that the government does not provide such services.

Dr Nik Rubiah said it was also a myth that the religion does not allow termination of pregnancy. “Actually the fatwa says it is permissible before 120 days provided the continuation of pregnancy will endanger the life of the mother,” she told a conference on unintended pregnancies organised by the Galen Centre for Health and Social Policy on May 20, supported by health care company Organon Malaysia.

She said while the fatwa might seem restrictive, it does provide room for discussion. “Because in the first place we had no fatwas so we had to go present our issues to the religious council.”

Sexual and reproductive health (SRH) issues are sensitive and complex, she added, but the MOH made its case to the fatwa council that if help is not extended to young girls who are sexually active, they might end up with unwanted pregnancies. “And without support, they might to resort to unsafe abortions, abandon their babies and so on.”

The fatwa council responded by providing guiding principles. “The medical officer must assess the situation on a case-by-case basis to determine what action should be taken based on the principle of the lesser of two evils,” Dr Nik Rubiah said.

“So, there are some guiding principles with regards to religion as well. I think this is good because we must continue to engage with our religious partners so that we can tackle these issues together.”

Guidelines For SRH And Abortion Services

Another myth is that government does not provide abortion services. “That’s why they (adolescents and young women) don’t come to our clinics to seek abortion because of fear, but actually this is a myth, because over the years the government has been very responsive,” said Dr Nik Rubiah.

“Because of the various issues we were having with youngsters with regards to SRH, abortion, provision of contraception for the unmarried, HIV and STI (sexually transmitted infections), we came up with this guideline,” she said, showing the audience a book with the title ‘Garis Panduan Pengendalian Masalah Seksual dan Reproductif Remaja di Klinik Kesihatan (Guidelines for the Handling of Sexual and Reproductive Problems of Adolescents in Health Clinics).’

“This is a comprehensive guideline for our health care providers, which takes into consideration the legal, ethical, social, and cultural perspectives,” she said. “In this guideline, we also highlight the importance of the health care provider to be non-judgemental, to treat in the best interest of the child, harm reduction and so on.”

The latest guideline, developed by MOH in 2020, is a guideline on handling requests for abortion and psychosocial support at primary health care facilities and hospitals. “This is a result of a series of workshop discussions with doctors of various disciplines: the O&G (obstetrics and gynaecology) fraternity, paediatricians, family medicine specialists, and also NGOs, religious bodies, not just Islamic but an Interfaith council comprising Buddhists, Christians, Sikhs, and Taoists.”

“So we came up with the roles for counsellor, medical social worker, social welfare officer and child protector,” Dr Nik Rubiah said. “And this takes into consideration whatever is stipulated by the law, the code of medical conduct, the fatwas and so on.”

All the guidelines are available on MOH’s website, she added. “And training is conducted to ensure the health care providers are aware and can provide quality services to the public.”

She said the number of unmarried girls and women who visit government health care facilities have increased. “This shows that our clinics are more accessible and they are willing to come.

Now young people are not viewed as problem makers as they were before, but are perceived as people who need attention and care, she said.

When it comes to barriers to accessing SRH services though, the problem is not just physical but also psychosocial, Dr Nik Rubiah said. ”It can be due to lack of awareness with regards to sexual and reproductive health so I think we also need to improve SRHR (sexual and reproductive health and rights) literacy among the public.” Everyone has a role to play in creating awareness about SRHR, she added.

“There are also social, cultural, and religious barriers based on their own values system. Let’s say the highest cases of teenage pregnancies are in Sabah and Sarawak. That’s because the culture there allows early marriage so it’s a cultural factor.

“This also needs to be addressed and we also need to educate parents so that they play a role in making sure that their children don’t drop out of school.”

She said studies conducted by MOH have shown in many cases children drop out of school not due to pregnancy.

“About 70 per cent of them, based on an analysis we did in Sarawak, dropped out of school a few years ahead. So there are a lot of factors we need to look into.

“We have to tackle the social determinants contributing to this issue of teenage pregnancies and make sure that access (to SRH services) is optimum.”