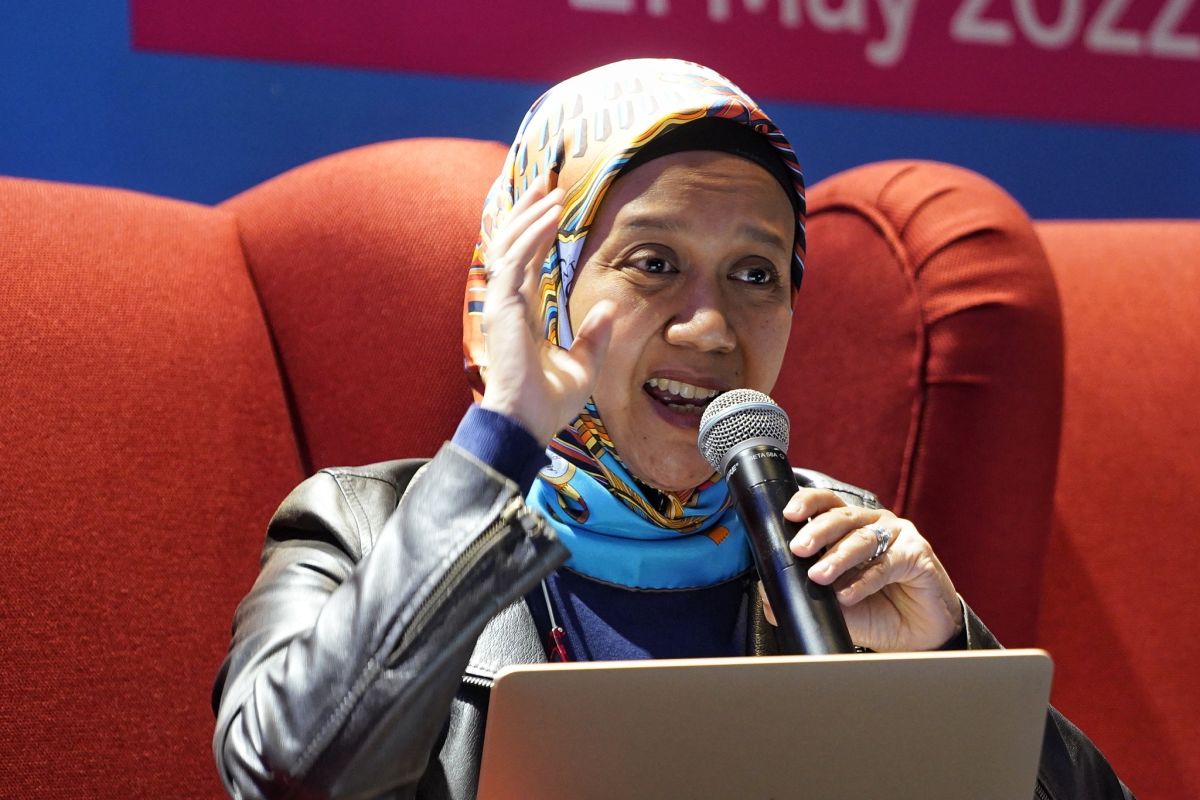 Dr Aizura Syafinaz Ahmad Adlan speaks at the "Tackling Unintended Pregnancies in Malaysia" conference organised on May 21, 2022, by the Galen Centre for Health and Social Policy in Kuala Lumpur. Picture by Saw Siow Feng for the Galen Centre.

KUALA LUMPUR, June 16 – Dr Aizura Syafinaz Ahmad Adlan was nine years old when she learned about sex from a cousin.

Not happy about this, the obstetrician and gynaecologist with Universiti Malaya Specialist Centre (UMSC) made it a point that when she had children, she would talk to them about sex on their eighth birthday.

“Suddenly, I was running a small eighth birthday consultation session for parents who are uncomfortable to talk about sex to their children.”

Sex education should begin at home, Dr Aizura told a conference on unintended pregnancies that was organised by the Galen Centre for Health and Social Policy last May 21 here, supported by health care company Organon Malaysia.

In school, sex education is offered through the subject, Pendidikan Jasmani Pendidikan Kesihatan (Physical Education Health Education), with only one chapter dedicated to learning about sex.

“And that is just the zakar (penis) enters the faraj (vagina). And that’s it. But the actual consequences about what happens beyond that has never been discussed,” Dr Aizura said.

“My daughter is now in Form Five and I’ve asked her just this morning, is that still not being discussed? Apparently not. So, sexual education in the schools is basically zero.”

Dr Aizura also wondered why girls and boys have to undergo sexual education classes separately. When she was enlisted to give a talk to 12-year-old girls at a school, another doctor was tasked with talking to boys of the same age from the same school.

“And there I was telling them about safe touch, what is allowed and what is not allowed, girls you do this and the conclusion was a lot.

“And on the other hand, there were the 12-year-old boys and the doctor was saying: ‘Hari ini apa kita belajar? (what did we learn today?)’. The boys learned – jangan pakai seluar dalam basah, nanti dapat fungal infection (don’t wear wet underwear or you’ll get a fungal infection). And that’s it!”

She said teachers should also be profiled to make sure they are religion-sensitive, tolerant, and are not likely to make vulgar remarks.

“So let’s have those sorts of teachers talk to the boys and girls together. Instead of having statements like ‘sow your wild oats’ for the boys and ‘keep your legs crossed’ for the girls.”

People in Malaysia are sexually active by the time they are teenagers, she said. “So you can hope and pray that people are not having sex, but you’re just being naive.”

Although sex is wonderful and healthy, it comes with consequences and responsibilities. However, communicating this to the younger generation is a challenge.

When it comes to dealing with children or teenagers, the only type of contraception Dr Aizura will discuss is condoms. However, she said anecdotal evidence has suggested that some people would rather not use condoms because “they think it reduces the feeling.”

“Coitus interruptus (withdrawal of the penis before ejaculation) is not a contraceptive method,” she asserted.

She suggested a straightforward poster might be the way to get the message across. “It’s either no sex, or condom,” she said of the tagline for the poster. “So, you make a choice, either you are abstaining or having sex.”

At the policy level, Dr Aizura said it would be good to have a think tank comprising “people of the now,” which includes Generations X, Y and Z.

“Our children are not going to listen to us, face the facts. They want to listen to their peers,” she said. “We are not talking the same lingo. Even certain terminologies are different.”

She said policymakers may try to rebrand or repackage sex education using terms like “reproductive health” and “social medicine” to make it more palatable for adults and culturally acceptable, but the message that obstetricians and gynaecologists want to disseminate to their patients remain the same.

“All this rebranding – it’s the same thing. It’s sex and how to do it well and do it proper,” Dr Aizura said. “This is what I don’t like about legislation and all that. It’s a lot of talk but no one is actually doing something.”

What would be useful, she said, is if the country has one standard algorithm for dealing with cases on termination of pregnancy, or abortion.

“Whatever the cultural or religious preference of the doctor on-call that night, or even of the patient, if we have that algorithm, then it wouldn’t matter because we do get cases in the hospital where they (patients) are pulled aside and told – ‘you better have this child because you have sinned once, you shouldn’t sin again. Have this child and carry on with your lives’.”

Dr Aizura maintained that doctors were bound by the Penal Code under the law, so policymakers have to set firm guidelines on whether it is justifiable to terminate a pregnancy or not.

She said it was time for the relevant parties to review the processes and determine if an update is needed. “At this point in time in 2022, I’m still asking for a woman’s husband’s signature to do a tubal ligation.”

She added that the review should be comprehensive, examining teachings at the primary to secondary school level, as well as the handling of unintended pregnancies from teenagers to adults.