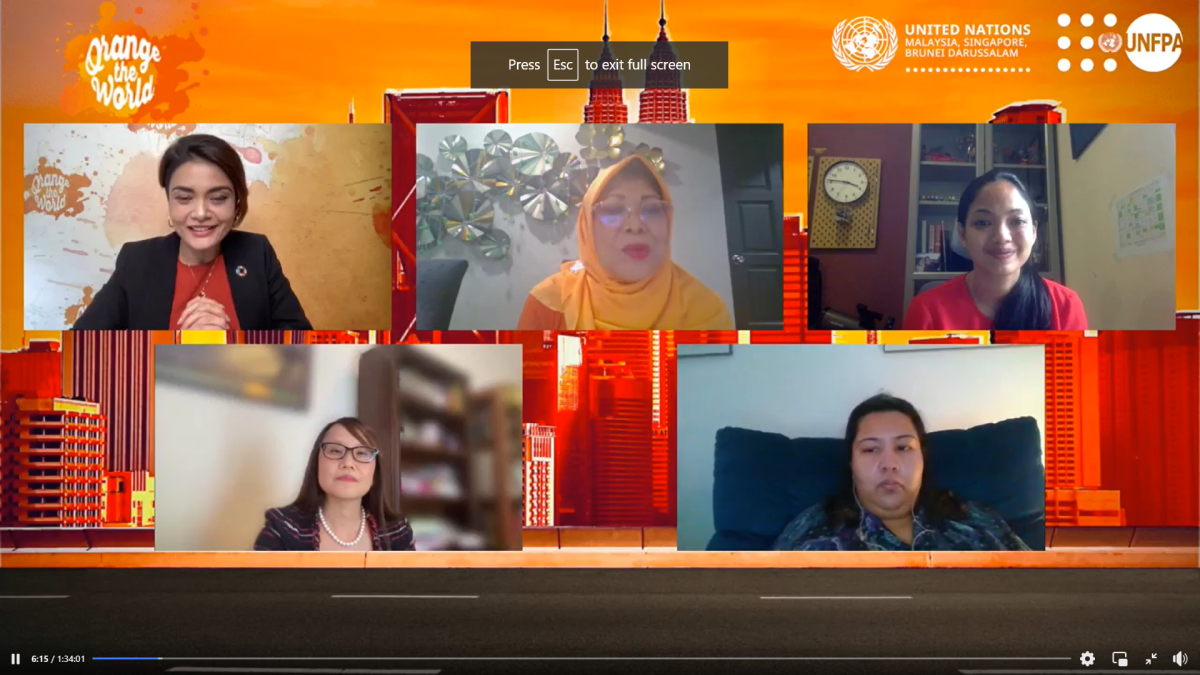 KUALA LUMPUR, Dec 8 – In conjunction with the International Day for the Elimination of Violence against Women (#IDEVAW 2022) on November 25, and the 16 Days of Activism against gender-based violence, United Nations Malaysia and the United Nations Population Fund (UNFPA) Malaysia hosted Road to Justice, a special presentation on overcoming barriers to justice for women impacted by gender-based violence (GBV) and economic violence.

They discussed the role of progressive legislation in ending and preventing gender-based violence against women, while delving into how economic violence underscores GBV.

Rohani said that GBV in the form of economic violence is ubiquitous, with most victims acknowledging they were made vulnerable to abuse due to economic factors. “Research has shown 99 per cent of domestic violence cases actually come under economic violence.”

While she highlighted that during her tenure as Women, Family and Community Development Minister in 2017, Malaysia had widened the scope of the Domestic Violence Act 521 to include “dishonestly misappropriating the victim’s property which causes the victim to suffer distress due to financial losses”.

Rohani said that we cannot claim to know enough about the true situation of economic violence and domestic violence, as the majority of cases go unreported.

However, she acknowledged that Malaysia had made some strides in policymaking with the tabling of the Anti-Sexual Harassment Bill and the Anti-Stalking Bill this year, offering greater to protection women who are disproportionately affected by such instances of GBV.

Murray from WAO pointed out though that the progress of both bills has been stalled due to the recent general election. “The Anti-Sexual Harassment Bill still needs to be gazetted so women have not been able to benefit from the bill, as of now. And as for the Anti-Stalking Bill, it needs to be passed once more in parliament,” she said.

“We do hope that the new government will be able to follow through with these commitments, which have been long in the making,” she added.

Murray added that amendments to the Employment Act also require gazetting. She said that WAO would also like to see further amendments to ensure that job seekers and informally employed women are also protected against pregnancy discrimination.

“More women than men land in informal work settings not due to choice, but the need to find employment that is flexible in order to arrange childcare needs, elderly care duties and arrange for time to care for their households,” she said.

Murray hoped that more incentives would be provided for women in the informal labour force, especially for small business owners, so they can formalise their businesses, leading to Malaysia increasing the female labour force participation rate (LFPR)

Regarding the Housewives Social Security Bill, Murray said that “while it is a good start in serving women who have no form of savings or protection for their health and safety primarily from a medical lens, it’s important to also have additions to the Bill for mental healthcare, to make it more substantial”.

Role Of The Patriarchy In Gender-Based Violence Prevalence

Vilashini said it is important to recognise the role of the patriarchy in GBV prevalence. “Patriarchy is best described as an instilled sense of social hierarchy which marginalises women and subordinates them to men, thus ensuring internalised discrimination in our structures, including the legal system.”

She added that in unpacking different lived realities for underprivileged communities, economic violence and financial abuse are incredibly crucial components for understanding domestic violence at its core.

Vilashini said in Sabah, the impact of pandemic-related unemployment include increased alcoholism among men, with women forced after years of being homemakers to work at irregular, low-paying jobs to ensure their families’ survival, and to pay for their husbands’ alcoholism.

Women may also turn to alcohol as a coping mechanism, which if left unaddressed extends into intergenerational trauma and a survivalist narrative for themselves and their families, rather than being able to achieve life cycle potential.

She said that such increasing disparity between income demographics leads to overall reduction in pandemic recovery and overall national development.

Goh said that mindsets must change when it comes to educating citizens about joint family assets as women are also breadwinners today.

She cautioned about the traumas of financial control and the resulting social isolation experienced by women, particularly those with fewer protections due to intersecting identities.

Goh said that when women aren’t given their fair share of matrimonial assets and abusive husbands minimise the amount of maintenance, children also suffer.

While the Law Reform Act in 2018 has allowed for maintenance to be paid beyond a child’s tertiary education at 18 years, the speed at which cases are heard in court means that currently trial dates are being fixed in Family Courts in the Klang Valley for 2024-2025.

An interval of two to three years before hearings begin clearly impacts children’s basic needs including food, as well as safety and access to education.

To remedy this lacuna, Goh recommended “a dedicated, specialised family justice system with specialised judges, staff, mental health professionals and financial professionals to help families think in terms of healing, therapeutic justice while actually mending societal tears so we can all contribute to this Malaysia terbaru (latest Malaysia)”.