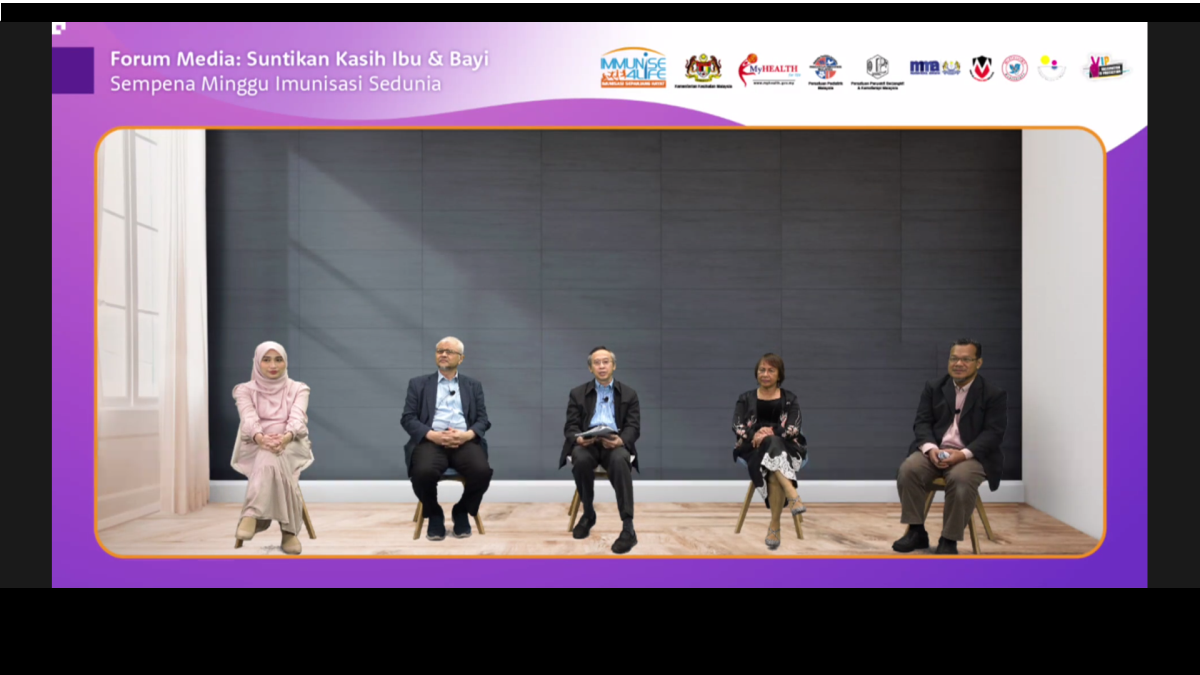 KUALA LUMPUR, April 29 — A recent survey conducted by Immunise4Life (IFL) has identified several gaps in childhood and maternal immunisation knowledge and practices among mums and mums-to-be.

IFL’s survey results were released during a media forum called “Doses of Love for Mom & Child” yesterday, held in conjunction with World Immunisation Week. The survey was conducted among 394 women of childbearing age from 20 to 45 years old.

During the forum, Dr Zulkifli Ismail, chairman of the technical committee of vaccination group IFL, highlighted that while most respondents are aware that maternal immunisation protects mothers (78.7 per cent), only 64.2 per cent know that it can also protect newborns, while 11.9 per cent are not sure of its benefits.

“Maternal and child health has become so important that it has become a benchmark for developing countries,” said Health Minister Khairy Jamaluddin, who officiated the event.

Malaysia’s maternal mortality, however, has stagnated since 2000 at around 23 deaths per 100,000 live births, despite almost universal coverage of maternal health services, according to the Malaysia Voluntary National Review (VNR) 2021 report.

Compared to Malaysia’s MMR of 29 maternal deaths per 100,000 live births in 2017, that year, South Korea’s MMR was 11, followed by New Zealand (nine), Singapore (eight), Australia (six), and Japan (five), according to the “Maternal mortality: Levels and trends, 2000 to 2017” report by United Nations agencies.

The Ministry of Health (MOH) began its National Immunisation Programme (NIP) for children in the 1950s, with only a handful of vaccines being provided for free at MOH clinics, said Khairy. “Now, the childhood NIP protects Malaysian children from thirteen vaccine preventable diseases.”

For pregnant mothers, the MOH began its maternal immunisation programme in 1976 by providing anti-tetanus (ATT) vaccination for free to all pregnant women. The programme, which is aimed at protecting mums and newborns from tetanus infection and complications, continues to this day.

The MOH is now planning to enhance its maternal immunisation programme with the introduction of Tdap vaccination.

“The Covid-19 vaccination programmes for pregnant women and children between the ages of five and eleven (PICKids), and twelve and seventeen (PICK-R) also showcase MOH’s consistent and continuous efforts to protect mums, newborns and children from infections,” said Khairy.

She maintained that women may not be aware of the vaccines other than those that are available, particularly at public health care facilities.

“Eighty per cent of pregnant women go to government hospitals and the Tdap vaccine is only available in private hospitals.”

Although some maternal and childhood vaccines may not be among those listed in the NIP and are only available in private clinics or private hospitals, they are just as important, said Dr Mohd Hanif Zailani, public health medicine specialist and head of the vaccine preventable diseases & food/ waterborne diseases sector in MOH.

“I would like to urge parents to get all the recommended maternal and childhood vaccinations, especially if they can afford to do so,” he said.

According to Dr Jamiyah, many countries have introduced Tdap vaccine to replace ATT to counter the rise of pertussis cases among young children.

She added that Malaysia is seeing an increase in pertussis cases, with 70 per cent of these involving babies under six months who are either too young to be vaccinated or have not completed their vaccination schedule.

“Newborns and infants are more likely to suffer from serious pertussis complications that can lead to death. Vaccinating pregnant mothers against pertussis is crucial in two ways,” she said.

“Firstly, it will transfer antibodies from mum to foetus through the placenta and provide the child with protection from birth until the child is eligible to be vaccinated.

“Secondly, it will reduce the likelihood of mum spreading pertussis to the child.”

She also emphasised the importance of getting vaccinated against influenza during pregnancy because, just as pregnant women have been known to have more severe Covid-19 symptoms, they are also at risk of more serious flu complications.

“Most of us might have forgotten that during the influenza H1N1 pandemic, many of the mortalities were pregnant mothers. We cannot afford to be complacent; vaccinating pregnant mothers against this preventable infectious disease is the right thing to do.”

“My husband and daughter were warded for influenza and I saw what they went through,” said Iman Abdul Rahim, a blogger and mother of two, who was also on the panel of the forum. “Now, every year we get the influenza shots for the whole family.”

The survey results, which were highlighted by Dr Zulkifli, also revealed that while most respondents (92.9 per cent) agree or strongly agree that vaccinating children on schedule is important, some are unable to put their convictions into practice.

Among survey respondents, 15.5 per cent missed or delayed their child’s immunisation and 0.5 per cent did not vaccinate their child at all. Most commonly cited reasons for delays or missed childhood immunisation appointments are “forgot” or “too busy,” followed by logistic/ transportation and safety issues.

“You would not wait thirty minutes into a road trip before putting your infant in a car seat, would you? Accidents can happen at any time,” he said, adding that if parents accidentally miss their child’s immunisation appointment, they should call the clinic to reschedule as soon as possible.

“Some parents have asked what they should do if their child is two years late for a particular immunisation appointment. In most cases, for example pneumococcal, diphtheria, pertussis and polio, the vaccinations can and should be given even if the child has reached the ages of three or four.  Do talk to your child’s doctor or paediatrician to determine what is best for your child.”

Prof Jamiyah emphasised that it is also important to follow the recommended maternal immunisation schedule. She said that maternal immunisation, at the appropriate stage of pregnancy, aims to provide maximum protection to both mum and baby through optimal placental transfer of vaccine specific antibodies.

Iman said she set reminders on her phone to make sure the dates of the vaccinations are free of any work or other commitments.“It also helps if my husband is aware of our child’s schedule so he can take over if there’s a need.”

Childhood And Maternal Immunisations Are Safe

Dr Zulkifli highlighted that safety is less of an issue among respondents when it comes to childhood immunisation, when compared with maternal immunisation.

“Researchers take 10 to 15 years to develop these vaccines to ensure their efficacy and safety,” said Dr Musa, adding that the vaccines were endorsed by regulatory bodies all over the world including the World Health Organization and the country’s own National Pharmaceutical Regulatory Agency (NPRA).

In the case of the mRNA Covid vaccines, he said research had been conducted for over 30 years and the development of the vaccine was able to be fast-tracked due to financial contributions from organisations like the Bill and Melinda Gates Foundation.

Eighty to ninety per cent of the children that he has seen have no problems with the vaccine, said Dr Musa. “Others only suffer minor side-effects such as redness at the spot of the vaccination, slight pain and fever. Any side effects usually occur within the first half hour.”

Prof Jamiyah maintained that the MOH does not approve the use of any drugs, including vaccines, on pregnant women in Malaysia unless there is significant research to prove their safety.

Therefore, mums should not hesitate to get vaccinated and should ask their doctors about any worries they might have.