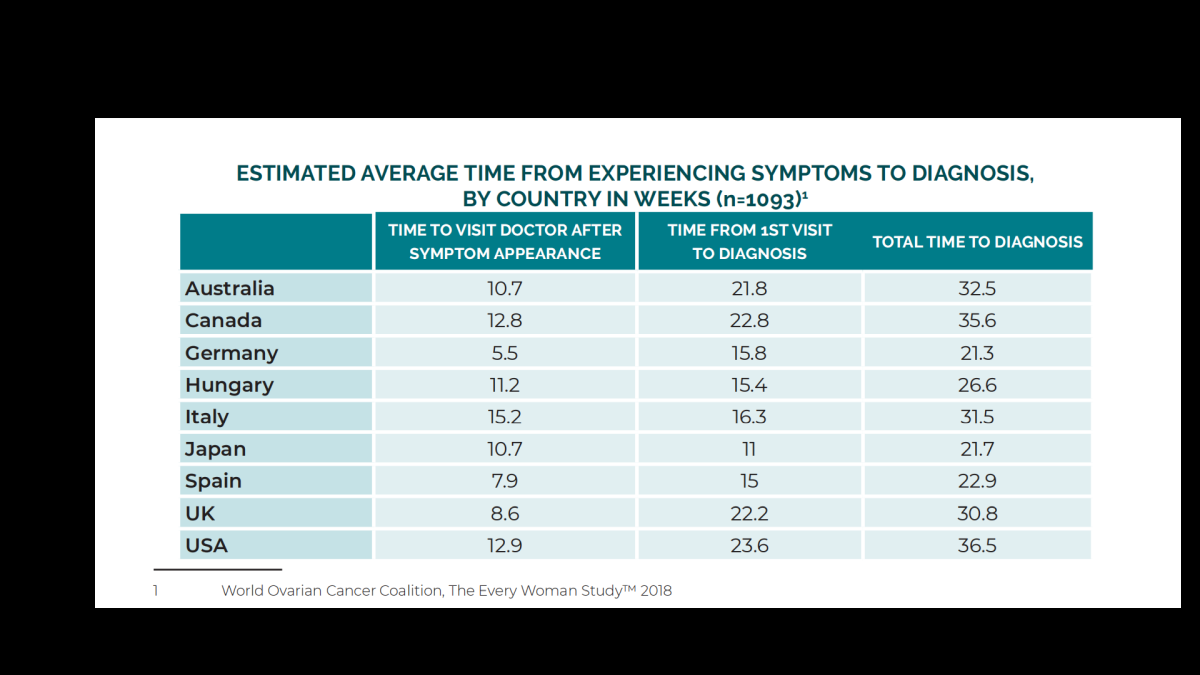 KUALA LUMPUR, May 6 –  On the eve of the organisation’s 10th World Ovarian Cancer Day (May 8), the World Ovarian Cancer Coalition (Coalition) has released an analysis showing that if actions were taken across all countries to equalise the ovarian cancer diagnostic pathway, the average time from symptom appearance to diagnosis could be almost halved by close to four months.

This conclusion is based on a further analysis of the 2018 Every Woman Study findings that showed that, globally, the average time to an ovarian cancer diagnosis from when first noticing symptoms is 31 weeks, or 7.75 months.

“The sooner a woman is diagnosed with ovarian cancer, the more likely she will be well enough to start and tolerate treatment,” states Clara MacKay, CEO of the Coalition.

“Yet, sadly too many women receive their diagnosis when they are so unwell that few, if any, options remain.  With the advent of new treatments for those with specific genetic mutations or characteristics, this means that many women will miss out on the chance of benefiting from improved outcomes.”

With no screening programme yet available, clinicians who took part in the Coalition’s 2018 Study agreed that raising awareness of ovarian cancer symptoms and risks among women and their physicians provides the best chance of reducing this time to diagnosis.

Crucially, the study found that the more women knew about the disease, the faster they went to their doctor and the more rapidly they were diagnosed.

Key findings from the Coalition’s Every Woman Study highlighted in the Data Briefing on Rapid Diagnosis include:

The Briefing also compared annual incidence and prevalence of ovarian cancer and concluded that up to 89,826 women die with ovarian cancer within one year of diagnosis.

With incidence and mortality rates set to climb by 2040, the need for awareness has never been greater.

“Too many women are being left behind,even when it comes to symptoms and risk awareness,”  explained MacKay.

This is something we are determined to change and is why on this our 10th World Ovarian Cancer Day, and for the next two years, we are adopting the theme of No Woman Left Behind.”

To help drive the global awareness movement, the Coalition this year has worked with many of their close to 200 patient advocacy partner organisations to provide core social media materials in as many languages as possible.

“Thanks to our supporters and partner organisations, we now have key messages available in 24 languages with more coming in,” said Phaedra Charlton, director of Communications and Marketing.

“As we are a global organisation, we want to ensure that we reach as many of those at risk as possible, so no woman – no person – is left behind. Last year, thanks to our partners, our message reached over 100 million people, but we still have a lot of work to do.”

For many, the opportunity of co-branded translated awareness assets is an important step forward in their work.

Raising awareness both amongst women and health professionals are two of the three core activities identified in the latest Data Briefing to reduce delays in diagnosis.

Part of that work, as outlined in this latest Data Briefing includes:

“Rapid Diagnosis” is one of the six Global Goals as set out by the Coalition’s 2020 Global Ovarian Cancer Charter, and states that: Women must have access to diagnosis without delay.  Symptom awareness must be improved so women seek and access appropriate help quickly. Doctors also need support so they know who should undergo testing and that they have access to tests without delay so more women can start and tolerate treatment quickly.