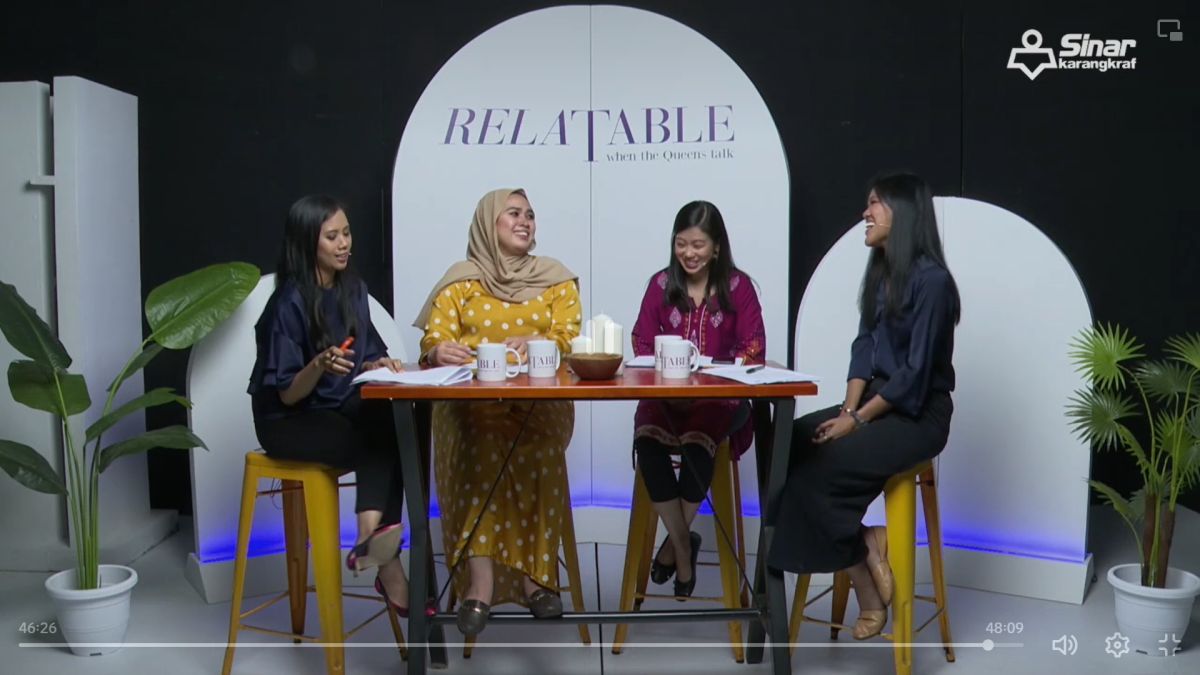 KUALA LUMPUR, Oct 6 — While last year’s budget was focused on recovery and building resilience after two years of the Covid-19 pandemic, Budget 2023 should create more opportunities for women to participate in the economy, incentivise businesses to provide child care, and promote women leadership and bipartisanship, said panellists on Sinar Daily’s Relatable programme on the topic of Budget 2023: What Women Want.

“Most of the rakyat and sectors were the biggest beneficiaries of Budget 2022. They received funding to restart and expand operations post Covid as a nation,” said Kok.

“In terms of the benefits, everyone received benefits to drive the socioeconomic recovery activities. That was the focus of last year’s budget.”

Kok said if there was such an increment in the budget, it should be used to review possible improvements for upscaling micro businesses owned by single women, as well as women from the B40 and M40 group who are just starting out.

She added that tax exemptions can also be provided for women in these categories to help them overcome their monetary issues as a result of the pandemic.

“The Wanita Bangkit (Women Rise) programme is a good initiative to encourage economic participation. That’s what we need to move on from the endemic — is to rebuild our economy in a sustainable way.”

She maintained that the programme can also function as a liaison between informal businesses and formal businesses so that the latter can assist the former by guiding them in developing and improving their operations.

However, she said data collection is crucial in determining the success of the programme. “Data collection is needed for women who run micro enterprises, to find out how much daily revenue they are generating. Do they require the use of their savings? Cash flow issues and whatnot.

“Currently, no statistics are available, even though the programme has been going on.”

“Coming from Selangor, I think if Rina really wants Wanita Bangkit to be successful, she must really work with state governments,” said Kampung Tunku rep Lim.

“It has to be community based — where religious leaders and NGOs set up counters and actively sign up people, explain to women what’s going on and how to apply.”

Lim added that household economies are another aspect worth exploring. “Maybe some women have or choose to be housewives, but they have some time that they can take tailoring or crocheting courses.

“A lot of the times the women I encounter, they just need a push up, whether through funding and skills.” She explained that the women may cook well but don’t know how to take good photos, for example.

“That would be an interesting area to look into because a lot of people have not gotten back their jobs or would like to work freelance. I think we should encourage that.”

The post-Covid period has seen the rise of the gig economy, said Kok. “With the existence of the Internet of Things (IoT), it’s a good opportunity for women to start businesses in their own spaces.”

She added that the Wanita Bangkit programme can look into other factors that may pose challenges for women to participate in the economy such as child care services and paternity leave.

In order to do this, Kok reiterated the importance of data collection. “We hope the ministry can do a data exercise to identify the kind of limitations in childcare services for women of various demographics. What (women from) M40 and B40 require and what they are willing to pay.”

She added that the data should also identify the role of men from the same groups and explore how they can contribute in uplifting women to join the workforce.

“Post-Covid, our life kind of went topsy-turvy. Traditional family and work roles switched. Some families found the men losing their jobs and having to take on the domestic role more full time than they did before,” Kok said.

“With this kind of narrative happening, it is a good opportunity for women to come up and help the family. When our community is healthy with healthy family structures, our country will be healthy and successful as well.”

Reshape The Narrative On Parenting

These circumstances have also made it an ideal time to reshape the narrative on parenting, said Lim, who added that despite both husband and wife working, in some families women are still expected to handle all the domestic duties.

“Why aren’t we asking the men the same question? I think a campaign discussing co-parenting, healthy parenting, taking on equal responsibilities, marriage as a partnership could be done by the women’s ministry through Budget 2023,” Lim continued.

“It would actually really impact society and not just girls, but also boys because they will have healthier role models to look up to.”

When it comes to single mothers dealing with issues like child care, Lim said the idea of compelling the private sector via tax incentives, to provide child care at their premises, has been floating around for quite awhile.

“I think the incentives will help because businesses are so tightened nowadays. I think we should start with the big tax conglomerates, and say their share capital is above a certain amount, then they should be preparing child care facilities in their own offices.”

Policies to encourage the private sector to think about the social welfare of their employees are needed, said Kok. “Aside from child care services, we are looking into paternity leave and nursing rooms as well.

“It will take time to involve the private sector to get into this but we believe with some government push and tax incentives, it will be slightly faster.”

“So if you have solar panels, you collect rainwater, you kind of tick off the list, and then MBPJ will deduct a certain percentage of your cukai taksiran (assessment tax). It gives incentives and that can be applied to companies.”

The lack of leadership among women in the workforce is another contributing factor to issues like the dearth of child care and paternity leave, or anything that favours or benefits women at work, said Kok.

Even when women assume leadership roles, these issues may not be addressed due to the deeply ingrained patriarchal culture in the country.

“This goes back to why these issues are not addressed as rapidly as we would like.” Because patriarchy is a popular belief and it extends to some of these (women in) leadership — they are afraid of stepping on some people’s toes,” she said.

Kok added that it would take time to challenge this belief in Malaysia. “When we talk about smashing the patriarchy, we want to remove toxic narratives, traditional gender roles that are outdated, obsolete and that do not serve the community in any way.

“For example, in the workplace women cannot make decisions pertaining to finance. That narrative has to change because in the education sector, we know women and men are equal. So, there has to be a woman who is as good as a man in making such decisions.

“We have to remove ourselves from that toxic narrative and normalise the fact that women and men each have roles to play.

“And some roles can be equitable and for some roles there are differences, which we have to embrace and move forward.”

At the government level, Lim said when it comes to smashing the patriarchy, that also means giving capable women portfolios beyond the ones that are typically handed to them, like the Women and Tourism Ministries.

“I think it was a good sign when PH was in power that Yeo Bee Yin headed MESTECC (Ministry of Energy, Science, Technology, Environment and Climate Change),” she said.

Seeing how there are few women holding leadership positions in politics and in Parliament, Lim maintained that embracing bipartisanship would be a good way to truly utilise an increased budget.

“For example, I think Datuk Seri Azalina Said was really great when she called the opposition female MPs to get together and draft out the Sexual Offences Against Children Act,” she said.

“I think that was a good effort. And if everyday women can see female leaders working together despite political differences, I think it makes a difference.”

Kok said increasing women’s political participation is something AWAM has been interested in exploring for a long time.

“But it’s not just training for women who are interested in joining political parties, it’s also exposing the community to normalising women leadership.

“Because I think that’s the problem with our country and some fellow Malaysians — they just cannot accept seeing women in a political decision-making position.”