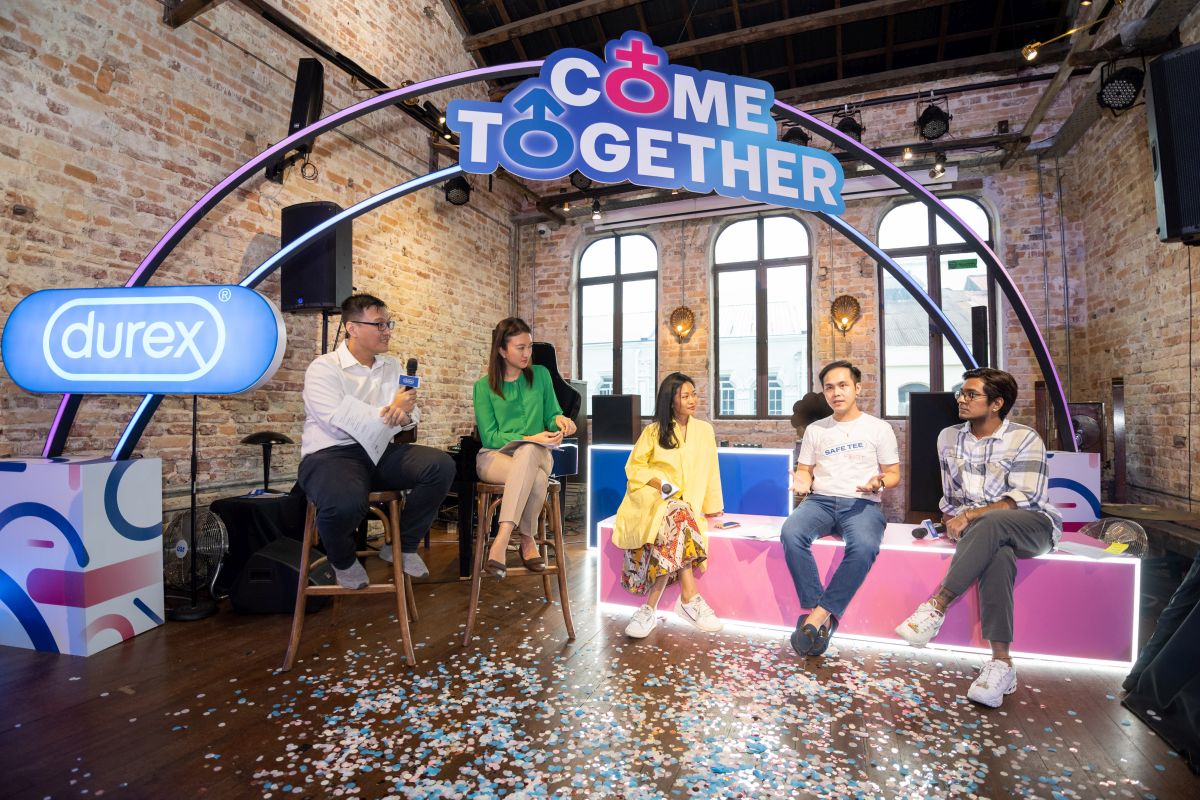 KUALA LUMPUR, August 16 – When Durex conducted its first survey on sex in 2016, the condom manufacturer received an astonishing response: one out of three Malaysian youths believed they could not get pregnant as a result of having sex for the first time.

“It really stunned us and we decided to do something for society because the perception is wrong,” said Jerome Goh, marketing manager for Durex Malaysia, at the launch of its #COMETOGETHER campaign at Jao Tim café on August 9.

Durex began partnering with NGOs to conduct workshops in educational institutions to educate youths about safe sex. As a result, Goh said, they reached more than 500 youths nationwide.”

“But we felt it was not enough, we needed to go the extra mile. So, we conducted another survey that was done in May 2022 this year.”

“In 2016, it was 18.8 per cent and now it has moved to 35.4 per cent. That’s a big increase,” Goh said. “So this really stunned us and it’s what prompted us to launch this whole programme which is called ‘Come Together’.”

Come Together is about normalising conversations around sex, Goh said. “We also talk about the differences that we have: different genders, different sexuality, different preferences.”

The campaign aims to empower youths so that they can make wise and informed decisions. “That’s the key thing that we want.  And one key thing is respecting themselves and that’s the empowerment message we want to send out.”

“I thought it was interesting that the survey showed that 40 per cent of youths felt pressured to have sex,” said Chan.

“One of the ways we can empower youth is (to teach them) to say no. The first attempt can be very traumatising if it’s not by a person’s own will.”

He said misconceptions about sex arise because parents don’t communicate with their children on the subject.

“We all know what sex is, we can feel it in our bodies but we don’t have a manual for it.”

Our grandparents didn’t know how to talk to our fathers about sex, Chan said. He maintained that parents learned to become parents by “role modelling” their own parents.

Siti Aishah, who runs a community project that promotes puberty awareness in schools, said respect and understanding is key to successful engagement with youths. She said her project enlists peer advocates and trains them so that they can communicate effectively.

“Our main goal is to remove the hyper sexualisation from the word sex itself and everything that comes under it. We want to one day talk about gender and sex very openly and respectfully.”

We Are All Born As Sensual Creatures

Siti Aishah added that SPOT provides safe spaces for young people to have conversations around sex and sexuality with a more respectful and human approach.

“We are all born as sensual creatures. As babies, we needed our parents to hug us. We need skin-to-skin contact, we need hugs, we need love and affection from our parents in order to be able to grow and fulfil our potential emotionally, mentally and also physically,”she said.

“Without touch, we won’t be able to be who we are today. So it’s important for us to speak authentically, to engage and connect as humans so our young people can understand, yes, it’s okay to be sensual, but what is safe or not safe, what is okay or not okay?”

While it feels good to share your body with people, Arwind says youths should be aware that there are also “red lights” when engaging with others sexually.

“Twenty-five per cent of youth are comfortable sexting or having their nudes shared. Online dating apps are liberating. I’m on online dating apps and it’s fun because you get matched with people who have similar interests.

“But the question is, how much do we know about ourselves? How in-depth do we know the world and people in general for us to consider ourselves safe enough to do things we feel liberated to do.”

Nobody should feel ashamed about having sex, said Arwind. “I don’t think anybody needs to be ashamed because sex is divine, sex is creation.”

However, the social media influencer maintained that it was important to be mindful of safe practises when engaging in sexual activity. “Although I have friends who are not ashamed to do it, they don’t necessarily understand the methods or the safe practices that should be implemented.”

The Importance Of Comprehensive Sexuality Education

The discussion they were having illustrates the importance of comprehensive sexuality education (CSE), said Tengku Aira. “CSE is a precondition for exercising full body autonomy, which requires not only the right to make choices on one’s body but also the information to make these choices in a meaningful way. It’s important in so many ways including gender equality.”

She said studies have shown that when men have sex with more women, they are seen as heroes, but when women have sex, they are “seen as something indecent.” “So, that’s an example of gender inequality which actually exists in Malaysia itself.”

According to a study published by UNESCO, among 155 countries, 85 per cent have policies or laws relating to sexuality education in place, Tengku Aira said.

“And more countries also have policies to maintain the degree of CSE at the secondary education level, more than at the primary level.

“So we promote age-appropriate CSE, but we have seen from our discussion earlier that from a young age, people are already exploring. So, it’s important that we start early while being age appropriate as well.”

In India, responsibility for sexuality education is decentralised at the state level, she said.

“In the state of Jharkhand, local government commitment, as well as a strong government-NGO partnership has been key to scaling up sexuality education. This (curriculum) has been integrated into school textbooks and in the in-service and pre-service education of teachers.

“So we don’t have this kind of programme yet in Malaysia,” said Tengku Aira, who added that the country’s multi-cultural and multi-religious setting, as well as its commitment to sustainable development goals (SDGs) have to be taken into account when educating youths and designing CSE programmes for them.

“And one of the important stakeholders, recognising Malaysia and its multi-religious component, are the religious leaders. And for UNFPA, we actually do engage with religious leaders. For example, when we did a sexual reproductive health module with LPPKN (National Population and Family Development Board Malaysia), the module was actually vetted by JAKIM.”

The significance of CSE is that it could prevent negative consequences such as teenage pregnancies, baby dumping and the need for abortion, said Tengku Aira, adding that these are issues that need to be addressed, which requires sensitising religious leaders to CSE.

Siti Aishah shared her experience as a grassroots activist approaching a school with an ustaz (religious teacher) as principal. “So, I went to a school that was an ex Al-Arqam school; the school is very religious. Everyone wears a hijab right down to their buttocks.

“I went in without a hijab to speak to the ustaz, just being myself, and said I wanted to talk about CSE, throwing out words like vagina, breast, buttocks,” said Siti Aishah. “Then he goes, Aishah, when can you start? My girls need this.”

Aishah said she got through to the ustaz because she spoke to him from the approach of a human being. “He is a father, he has a wife, he was born by a mother, he did not magically appear all of a sudden.

“So, that’s how we engage. We do work together with religious people, and we constantly communicate to be able to address any concerns from them.”

Arwind said the notion of sin also had an influence on people’s sexual behaviour and practices. “I think it’s important to debunk certain myths pertaining to how purchasing, or buying, or having a condom with you is sinful. Protection is not sinful.”

“Having a baby and not being able to take care of a baby is sinful,” he maintained. “Because I think that’s what people fear the most. The thought of, am I sinning? Am I going to hell for this? All of this needs to be stopped so that people feel safer to practise proper sex safely without feeling fearful of whatever.”

It all boils down to education, said Goh, adding that people who feel ashamed about purchasing condoms should compare the stress they feel in that moment to the long-term stress of an unwanted consequence from unsafe sex.

“If you feel shy at that point in time, you feel shy for one minute. But imagine if you contract an STI, that’s when you are going to regret and the stress moment is even longer. So, it’s better to be safe than sorry.”