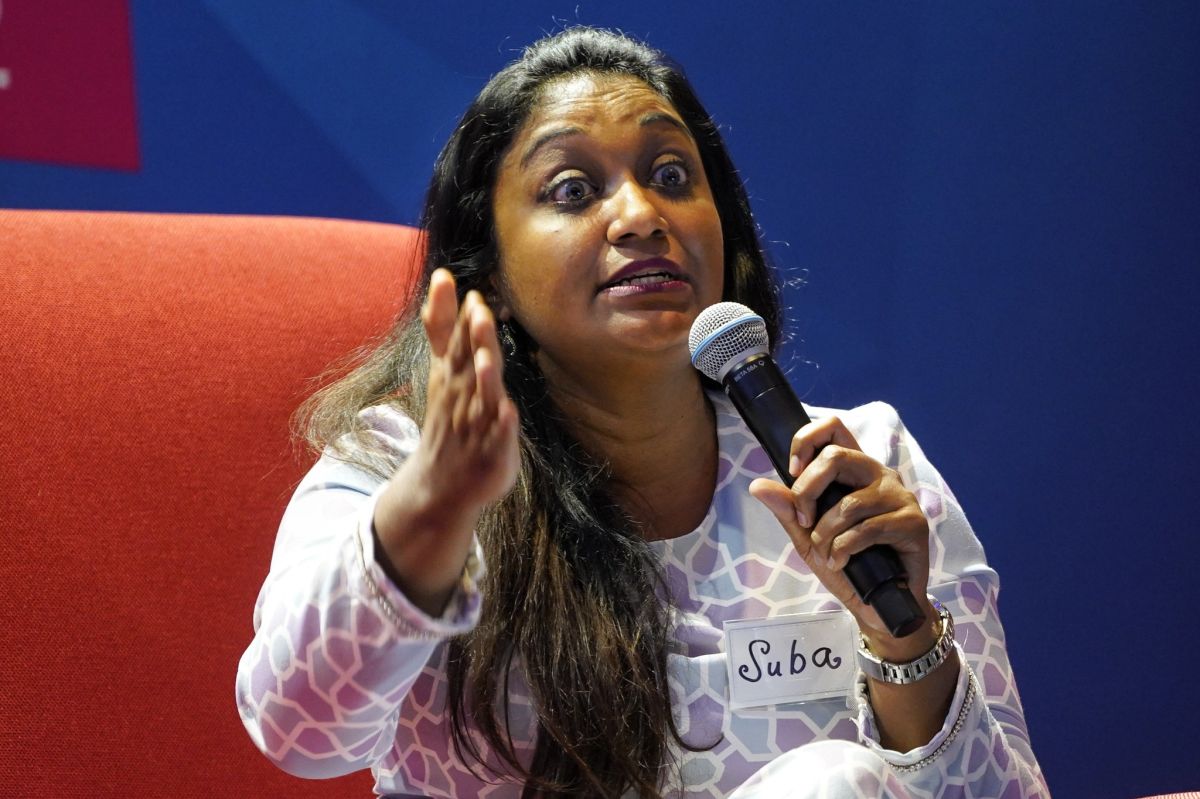 Dr Subatra Jayaraj speaks at the "Tackling Unintended Pregnancies in Malaysia" conference organised on May 21, 2022, by the Galen Centre for Health and Social Policy in Kuala Lumpur. Picture by Saw Siow Feng for the Galen Centre.

KUALA LUMPUR, June 17 – Although her primary care clinic is based in Petaling Jaya, Selangor, Dr Subatra Jayaraj has patients who come from as far as Kota Baru, Kelantan, to get an abortion.

They travel eight hours by bus to visit her clinic to terminate their pregnancy safely, before getting back on the bus to return to the state capital of Kelantan in the east coast, making it a 16-hour journey.

When Dr Subatra – who is president of reproductive rights group, the Reproductive Rights Advocacy Alliance Malaysia (RRAAM) – told a conference on unintended pregnancies last month that she was the “only young, female publicly open safe abortion provider in Malaysia,” the room erupted into applause.

However, Dr Subatra said her status as such does not bode well for the country.

“We’ve heard that there are half a million births a year in Malaysia. We’ve heard safe abortion is legal in Malaysia. So why are health care providers not providing this service?” she asked at the conference organised by the Galen Centre for Public Health and Social Policy on May 21, with support from health care company Organon Malaysia.

“Why are Malaysian women and women in Malaysia not able to access these services in an environment that is actually very progressive?”

Despite describing Malaysian law on abortion as progressive and protective towards doctors and patients, Dr Subatra said abortion services are not readily available and can be quite expensive.

“More than 90 per cent of terminations are done in the private sector. Public hospitals have had a policy since 2012. However, last week, I had a [patient with] fatal foetal malformation and an advanced pregnancy denied termination in the public health sector,” she said.

“They have to go to the private sector and it’s not free.”

The problem with abortion services in Malaysia is not the availability of service, but getting access, said Dr Subatra. “Safe abortions in Malaysia range from RM700 to RM8,000 for the same procedure. Why should clients have to pay 10 times for the exact same procedure done by the same skilled provider?”

Safe Abortions Only For The Wealthy

Safe abortion is the domain of the rich, educated, and well to-do people, Dr Subatra maintained. It is people from marginalised communities that have cause for worry when it comes to terminating their pregnancy.

However, she said RRAAM has a list of reasonably priced practices ranging from RM700 to RM1,500 for termination of pregnancy in the first trimester.

Dr Subatra said her clinic also offers affordable services, with most of her clients coming from the lower income to middle income group.

“Clients ask me, ‘kenapa doctor, benda ni macam lain ke? (why doctor, is it different?)’. It’s the same exact one because Organon is the sole distributor, so we’re using the same thing at different costs.”

She said this is why Malaysia’s health care system needs to be re-examined and to see how the private sector can play a role. “We must keep emphasising the need to provide affordable health coverage to improve universal health coverage for everyone.”

Although she has experience on the ground as a health care provider, Dr Subatra said she is “always fighting policy.”

He said a few factors are necessary; one of them is evidence. He cited WAO’s work on increasing resources for domestic violence services as an example.

“And that was our first step to push our campaign on budgeting and it did result after a while with some increased budgeting. So evidence is key.”

Policy change also takes a lot of time, Yu said, citing as examples, amendments to the Domestic Violence Act and the inclusion of paternity leave in the newly amended Employment Act 1955, which both took about five years to come to fruition.

“The Domestic Violence Act wasn’t even a new Act. It’s just an amendment Act. We started a campaign in 2013 and then in 2017, we saw the amendment bill come out through a five year process,” Yu said.

Amendments to the Employment Act have yet to come into effect after the legislation was gazetted last month. Human Resources Minister M. Saravanan told Malaysiakini that the Employment (Amendment) Act 2022 would come into force on September 1 and that the Human Resources Ministry was working on “carefully” wording changes to the First Schedule that specifies which group of workers are covered by the labour law.

Leadership is also important in bringing about policy change, said Yu. “With every policy success that we have had, there was always a leader there who would meet with us and put in some effort to help us push certain things through. Dato’ Seri Azalina is a great example,” he said, referring to Azalina Othman Said, the Pengerang MP who chairs the Dewan Rakyat special select committee on women, children affairs, and social development.

“We have to say that every change that has happened in terms of women’s rights, and gender issues, in the past five years, ten years maybe, somehow Dato’ Seri Azalina was involved so we do have to acknowledge that the role of leadership is actually very important.”

He also cited the national domestic violence committee as an example of an initiative that was realised through leadership. “And that was something that we had been working on for many years, and once Hannah Yeoh was in power, she was able to say, ‘okay, we’re going to do it.’ Just like that. So the individual leaderships are very important,” said Yu, referring to the Segambut MP, who was formerly deputy minister of Women, Family and Community Development.

Harder To Advocate For “Sensitive” Issues

Another factor that plays a part is politics, said Yu. “Certain things need to be politically favourable, or at least acceptable.”

By acceptable, Yu said he means that “it’s not going to create some huge controversy for the majority of the population or a key constituency of the power base, for example.”

“In the work that I’ve done, here’s where we have benefited from movements and political change that has happened over 20, 30 years.”

“Now, I would say it is. No one would argue with us now when we say we want to improve domestic violence laws.”

Similarly, issues like maternity leave, labour laws, and such have become part of United Nations standards and practices, as well as global movements, which benefits their advocacy efforts, said Yu.

“We have faced more problems with things that are a bit more sensitive. Looking at rape in marriage is one. No politician was going to stick their neck out for that. Some tried. Hannah Yeoh, she tried but the real decision makers for that issue were definitely not going to do so.”

The women’s rights activist said the time is ripe to act on issues when there are changes in leadership and power. “As active citizens, we have to be engaged in the political process.”

When it comes to reproductive health, Dr Subatra said moving the needle from just conversations about rights to something more actionable would require people to keep speaking out and for there to be a change in the way health care providers operate.

“Doctors are supposed to be guided by evidence-based medicine. But unfortunately, in practice doctors are guided by judgement, discrimination, and their values when they are not supposed to impose their values, especially on a subject like sexual and reproductive health, which is full of stigma by society, family and community,” she said.

“And that adds up to an increasingly stressful barrier for clients to come in.”

Responding to a question from the host of the forum, Dr Subatra said her policy request would be that “every woman in Malaysia has access to maximum reproductive health service without any judgement and discrimination, regardless of marital status, age or gender.”

She added that although currently there are documents and policies that support this, it is not necessarily being practised.

“We need to continue pushing this, having these hard conversations with the MOH.

“Stigma and discrimination should not influence our decision as health care professionals, and it is on us to increase this awareness and increase health education in the universities, and also look at how we practice humanity.”